Tweet
It looks like Henry is going to start his 17th birthday in heaven. Well, his idea of what it may be. He’s having a sleepover with his best friend Gabe and as they lie in bed together almost naked they start fantasizing about sex. Whilst Gabe talks about lusting after some girl, Henry is also lusting too as they both masturbate under the covers, but he keeps the object of his desire to himself as its actually Gabe.
When the day starts off downstairs as the family start to assemble we slowly discover that the birthday boy is not the only one who has a big secret that is tearing him up inside.  Henry’s father is a newly ordained Pastor and is the one that sets the holy-than-thou attitude that permeates the household and is the reason why  most of the problems  are suppressed even though several are  so close to breaking point.  As all the guests arrive for Henry’s birthday the atmosphere is more like a Church Revival Meeting than a summer pool party with everyone quoting chunks of scriptures and patronizing asking some lone poor soul who is not one of their congregation ‘Are you churched?’ 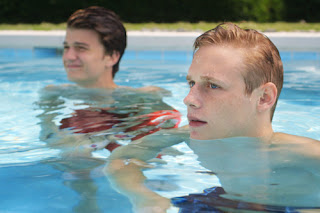 Behind all this rather unnatural faked bonhomie there is a sea of unhappiness and melodrama that slowly unfolds.  Henry’s mother has recently confessed to having an affair and wants out of the marriage, his sister is deeply regretting giving up her virginity before she was wed (but changes her mind again later in the evening.) Each of the guests have some sort of troubling issue too like emotionally disturbed Rickie who when he accidentally gets trapped in the bathroom, performs a violent of self-mutilation, whilst his alcoholic mother is knocking back wine from a coffee cup downstairs.
Lucas a young African/American gay man who obviously fancies Henry, is the subject of  rampant homophobia from the whole crowd ‘you don’t chose you color but you do chose to be gay’ . They justify their stance on ‘the scriptures’ which they all quote verbatim when it suits them.
All this takes place besides the swimming pool with all the rather attractive scantily clad young people  diving in and out of the water, whilst the fully-dressed adults sit nearby with their idea of light party banter that included topics such as porn and human trafficking.  Its no wonder their long suffering partners were relieved to get their hands on a secret stash of wine at this alcohol free party. 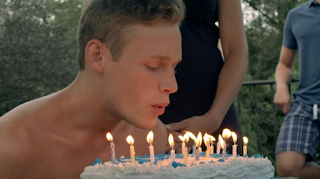 Written and directed by Stephen Cone, who is the son of a Southern Baptist Pastor, this wee film full of good intentions, tries to squeeze in too many stereotypical characters into an over-wrought plot that takes over half of the movie just building up our expectations before any of the story strands start to take off. The trouble with the delay is that the sanctimonious religious aspect is a little too overwhelming, that it is difficult to emphasize with many of the characters when they eventually start to crack.
It is however a interesting and spirited take on the Evangelical church’s heavy handed attitude on sexuality and it has some excellent moments, particularly the scenes with Henry (Cole Doman) who shone through it all.  This is after all his coming-of-age tale and he (and we) so deserved the happy ending.
For more LGBT Film Reviews go to: www.queertiques.com.