Tweet
Chemsex is an unidentifiable issue to most people but after watching this excellent but scarily sobering new documentary from filmmakers Max Gogarty and William Fairman of VICE you will see how this fast-growing phenomenon is deeply affecting a certain part of the urban gay community.  It’s about gay men ‘slamming’, which is evidently the more sociably acceptable term now used for injecting drugs and shooting up, and all for the purposes of having some very extreme sex.  It is a lot more complicated than them just wanting to have the best inhibited sex that is possible, but it is the main reason that most of the men who lined up to be interviewed gave for why they took a hefty combination of ‘recreational’ hard-core drugs such as meth, meph and G, on a regular basis. 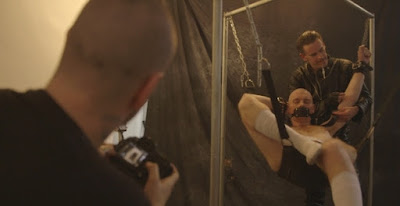 The film, made with the cooperation of 56 Dean Street, London’s first Sexual Health Clinic, lets the various addicts tell their stories and very carefully avoids any judgements of any kind as they are actually proffered by the men themselves, particularly the ones who are at the point of wanting to get sober. There are very disturbing graphic images of naked men intravenous taking copious drugs and then immediately getting sexually aroused and participating in completely inhibited and wild sex all up there on the screen. The men boast that the drugs are an enabler and result in a sexual high that they can never hope to even come close too when they ever try to have sex when they are sober.

Chemsex users have their own preferred hook-up websites such as nastykinkypigs.com, and an on-line language that indicates to each other their own particular drug-fuelled practices, and a network which obviously leads them to  the sex parties and the drugs themselves.  This is completely alien to us on the outside, but the film makes it clear that these disturbing and dangerous practices are very obviously a realty to a growing population.  What was also surprising was that most of the people that the filmmakers interviewed were extremely bright and articulate men and very much aware of the self-destructiveness of their chosen behavior.

There is no question at all here about safe sexual practices as all the participants, whether they are HIV positive or not, engage in unprotected sex with barely a second thought. Some relish in the fact that thanks to medication their viral load is undetectable, and others just accept that they will inevitable get the virus.  One young 20 year-old brushed it off with ‘HIV is a fact about you, BUT it is not the defining factor’. Nevertheless  as it was also pointed out,  5 gay men are still being diagnosed with HIV in London every single day.

David Stuart an ex-addict who now is a Counsellor at the Dean Street Clinic is one of a couple of people who attempts to explain the possible circumstances of why this scenario is prevailing now. Most gay men he claims, considered drugs and sex as two separate entities but now many see them as one, and in fact  dress it all up to make it seem more respectable and socially acceptable. There is also the fact that not every gay man wants to assimilate into society, especially as a community we have never fitted into the heterosexual norm.  We have always been outsiders in many ways and on the margins, and have written our own rules and even policed ourselves to a certain point.  Then there is the whole matter of internalized homophobia that each gay man has to address when he comes out of the closet and deal with the whole issue of shame.
Whether you agree with this reasoning or not, by the end of the 83 minutes of watching this all unfold on the screen, it is extremely difficult not to be totally stunned and rather dazed by it all.  As the final credits roll, the update of a few of the men interviewed who are doing their best to stay sober, at least gives you hope.  Full credit to the people at VICE media for making this account which should be compulsory viewing for the gay community, even if you have never taken anything stronger than an Asprin in your life.