Mike Skiff’s illuminating new documentary on the Folsom Street Fair, one of San Francisco’s iconic gay events, starts off by dispelling a few of the myths that surround its 30 year history. Initially the Fair was created in 1984 as part of a growing protest movement that objected to the enforced gentrification of what previously had been one of the most blighted areas of the city. The inhabitants of the skid row houses and the working men bars were being forced out as the Authorities bulldozed their way through the area to put up shiny new expensive buildings.
This was also the height of the AIDS crisis, which would go on to decimate the city’s gay population so the advent of the Fair created an opportunity for much needed fund raising. Audrey Joseph a local activist stressed the point that the presence then of so many women supporters, who were the most accepting of AIDS victims, helped create a crucial space without judgments at the Fair 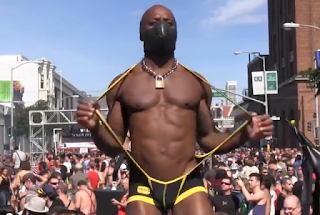 The whole area known as South of Market was already home to a plethora of leather bars which local historian Jack Fritscher Ph.D. explained had sprung up as bolt holes for gay hyper-masculine men who were not interested in the stereotypical roles that were most prevalent in the community at the time.  Dr. Fritscher who also worked for Drummer the now defunct leather magazine talked about the oft misunderstood leather and BDSM community who came into its own then by promoting their safe sex practices.  He explained said the whole concept of successful BDSM is sexual acts within agreed lines of limits to make sure each part is safe and pleasurable.  It wasn’t an argument that sat well with the Authorities who at the time were panicking like everyone else and wanting someone to blame for this uncontrollable epidemic.
Skiff added “In the 1970s, Folsom Street was the West Coast’s mecca for anyone on their leather journey in life “ and his movie goes on explore why the Folsom Street Fair couldn’t have got started anywhere else but San Francisco.” When someone talks about Folsom Street Fair now the leather and fetish elements of the historic outdoor celebration of sexual diversity are likely what come to mind, and it follows the tradition of where members of the LGBT community are given the space to explore the full spectrum of their sexuality and queerness.

It’s the one time of the year when those into kink and fetish can literally dress anyhow and do anything they want and the Fair security staff who police the streets will only stop  them if they engaging in full on sex.  Evidently that you can do in any of the Bars on the strip.
Nowadays the Fair is not only a major social event it is also one that has an enormous economic impact on the city. Demetri Moshoyannnis the Executive Director estimates that San Francisco benefits to the tune of some $35.4 million in revenue, and the Fair itself raises some hundreds of thousands in profits that it distributes to fund important local non=profit organisations .