When the  movie opens with an overflowing blocked lavatory in a small Bed and Breakfast Guest House in Saugatuck, you panic slightly if this small indie comedy is headed down the toilet pan too. The place is run by Maggie and her ‘can’t get a date’ gay son Drew and as it is Thanksgiving they are planning for the imminent arrival of the daughter of the house who left town to find her fortune and a fiance.  She also found ‘God’ too and has become of these homophobic self-righteous pricks who want to impose their own bible-laden morality on everyone else who is not nearly as holy as her.  The ‘family’ is completed by Drew’s best friend Brett who once dated Penny but is now more in love with liquor, and two full time residents, LaQuisha an African-American tranny, and Roberta who looks like she should be someones grandmother. 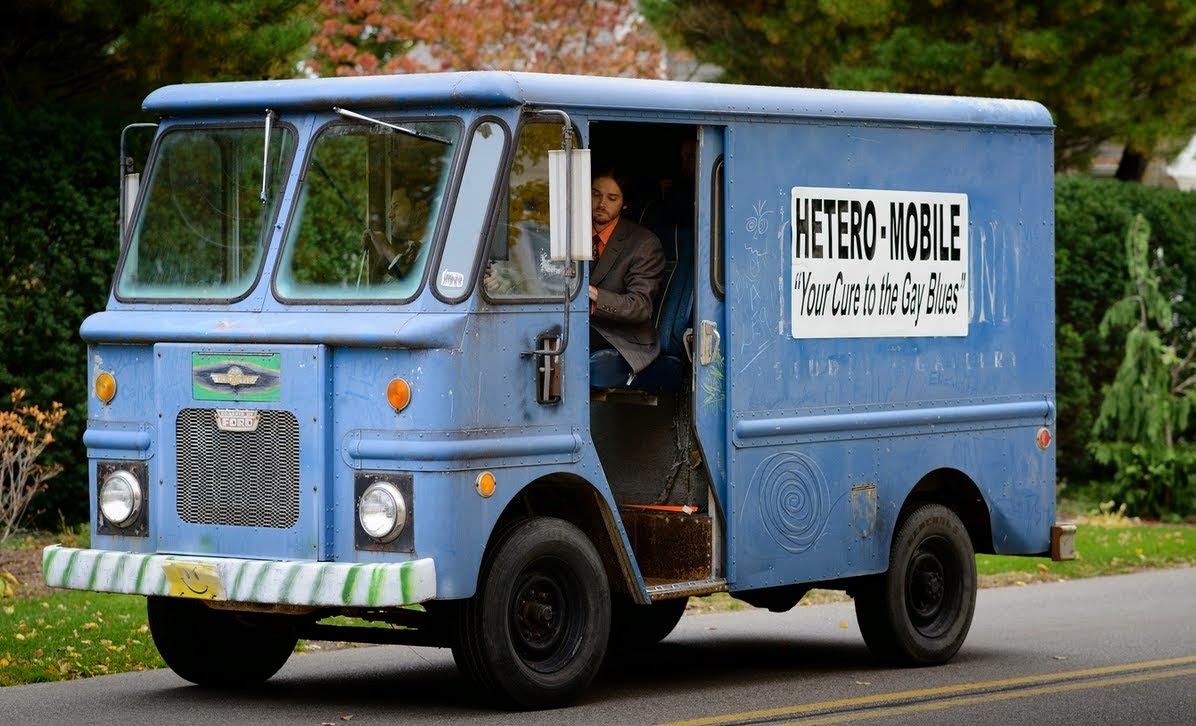 Maggie lets slip that her cancer has returned and her only hope for survival is an expensive experimental treatment in Chicago which she simply cannot afford. Neither can penniless Drew, so he reluctantly goes along with Brett’s madcap scheme of usurping the work of Penny’s fiance who runs a Gay Conversion scheme.  The reasoning behind this is that they can tour all the Evangelical Churches in the State and hit them up for people who will pay to ‘become straight’ and raise enough to pay for all of Maggie’s treatment.
As unbelievable as it is, their fraudulent plan works and soon they are coining in the money, but it is also the part of the movie where the comedy turns into a farce, some of which is too far fetched and forced to be funny.
The plot may be lame, and the script grimace- making at times, but for a refreshing change for small budget movie like this, it has some really good acting. Max Adler (‘Dave in TV’s Glee’) is a rather charming Drew; veteran Soap Star Judith Chapman (‘The Young & Restless’) is a very grounded Maggie; and talented actor/filmmaker Danny Mooney is a very likable Brett.
Credit too for the fine production values and particularly for the unexpectedly impressive soundtrack.
Whatever its faults, it is hard not to warm to this big-hearted indie small movie, which although may not have you rolling in the aisles, will have you grinning from time to time, which is never a bad thing. The best line belongs to Brett who wants to hand all his own savings to Drew towards Maggie’s treatment. His BF refuses saying ‘it’s your rainy day fund’ to which Danny quickly retorts ‘Dude, it’s pouring!’

s of Manila amidst a vibrant transsexual community Dorina who is known as the ‘Doc’, is the purveyor of quick fix beauty enhancements.   In a culture obsessed with looks and glamour this ex-entertainer provides the necessary collagen implants so that the ‘lady-birds’ can be transformed into a replica of their favorite female celebrity.  With the next round of the Miss Gay 2013 Pageant about to happen Dorina is kept very busy trying to make sure her ‘clients’ are pretty enough to win Best Face as well as Best Gown Categories.