François Ozon means to grab your attention from the very first frame of this movie which shows a young bride in a wedding dress lying in a coffin surrounded by white roses and sobbing mourners. Standing besides David her husband is Claire who has been Laura’s best friend since childhood and she finishes her emotional eulogy by promising to look after Laura’s baby and her husband too.
In the weeks that follow Claire is too distraught over the loss that she resists checking up on her new charges.  When she does finally pop in to their nearby house one day without warning, she is totally unprepared for what she finds.  Sitting on the couch is a blond woman who from the back is a dead ringer for Laura, but when she turns around Claire is confronted by the sight of David dressed head to toe as a woman.  Both of them are startled by the confrontation especially Claire who quickly departs after denouncing David as a pervert. 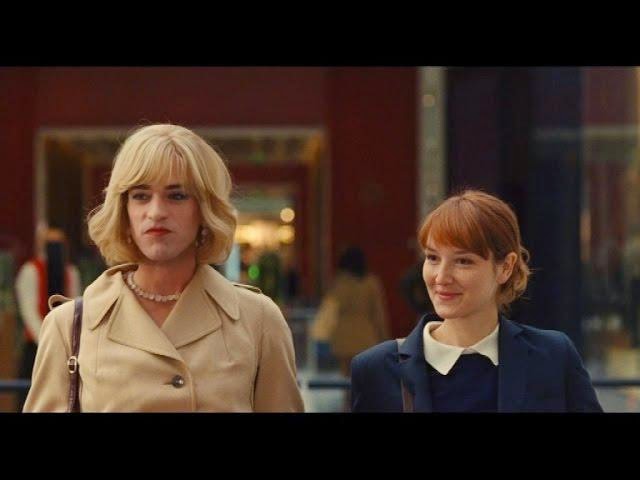 However she is intrigued enough to want to go back and learn more about his long-standing cross-dressing habit.  He explains that he is not gay but that he has always enjoyed dressing up in women’s clothes and something that he did with his wife’s knowledge.  He goes one step further by confessing that he has never left the house dressed like this and so he implores Claire to accompanying him on an outing to go shopping at the Mall.

As nervous as she is about the whole situation, Claire agrees and it pretty soon becomes obvious that she likes being part of the David’s secret side.  In fact it is she who randomly names his alter ego as Virginie and she soon gets a kick helping her new friend having fun dressing up.
When Virginie and Claire get really tight it leads to a suggestion of sexual attraction which muddies the water somewhat.  Virginie has fallen in love with his late wife’s best friend, but it seems however that Claire has been drawn in looking for a substitute for her Laura who she so pines for and is horrified when she realizes that under all the attire, Virginie is still a man.
As perverse as he usually is in his movies, this time Ozon has gone against his usual style and wrapped the whole thing up on a joyous sunny note.
In one of his best ever performances, one of France’s finest contempory actors Romain Duris totally nails David/Virginie.  He’s lost even more weight which suits all the chic clothing he gets to dress up in, but much more important than that he captures the feminine aspect of his character so perfectly without even a hint of campness that could so easily have reduced Virginie to a caricature. He is a sheer joy to watch (let’s hope he finally gets his first César Best Actor Award for this) but so too is Anais Demoustier who plays the shy Claire who finds her inner self and her voice by the time it is over.
Ozon has always been a great one to play with different sexual and gender identities and he has a wonderful time with this story making Virginie aka David ultra feminine right down to her flouncy lingerie, whereas Claire is so often in trousers that her husband is visibly shocked on the rare occasion she puts a dress on.  It is a real treat.