The LGBTQIA movement has taken massive strides in the past few years. It was only 10 years ago that Massachusetts became the first state to allow homosexual couples to marry.

While these advances are no doubt amazing, transsexual and intersex people still face a great deal of hardship because of other people. Luckily, there are a great many states that have special statutes that protect them and social climates that welcome them. 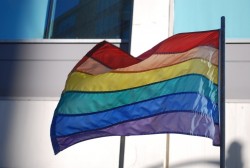 The following is a list of states (in no particular order) that are exceptionally welcoming to gay, intersex, and transgender people.

This one shouldn’t be a surprise. California has the best legislation that any member of the LGBT community could ask for. What’s even better is that it’s jam packed with us, so you’ll be able to surround yourself with people just like yourself if you choose.

California does suffer from one particularly annoying problem though. The cost of living is very high regardless of what city you choose to live in. If you’re looking to be frugal or get your first apartment, you might want to look elsewhere.

When you consider the fact that crowded metropolitan centers tend to have lots of discrimination and poor social infrastructure it’s surprising that a place like New Jersey would be here.

But New Jersey absolutely deserves this spot due to its great anti-discrimination laws that prevent LGBT people from being taken advantage of. It’s also a stone’s throw away from New York, which (while extremely liberal) doesn’t have a law distinctly prohibiting genderqueer discrimination.

Iowa has legal gay marriage, legal gay adoption, and anti-discrimination laws that protect LGBT people. There’s nothing to complain about here. You also get to enjoy the gorgeous Iowa scenery as a side perk!

Connecticut has the perfect trifecta of legal rights that you’d expect from a liberal state (adoption, discrimination protection, marriage). It also has the benefit of having many nice neighborhoods of varying income levels, so you can live in a nice house even if your budget is tight.

Lastly, it’s well within the vicinity of larger city centers like New York, so you won’t be cut off from the world if you move here.

Massachusetts is basically the birthplace of gay acceptance. It boasts gay marriage (of course) discrimination laws, and pretty stable real estate market. However, the cost of living can be a tad high. It’s nowhere near the likes of New York or San Francisco though.

How end of foreclosure moratorium may impact LGBTQ homeowners

‹ Now that Gay Marriage is Legal, What Does it Mean for the Mortgage Market? › Protecting Your Visitation & Decision-Making Rights