A Gay Girl in Damascus: The Amina Profile” Wowed Audiences at Frameline

Sandra Bagaria a French Canadian Jewish girl from Montreal went online looking for love.  She thinks she has struck gold when she hooks up with a Syrian/American lesbian called Amina who is currently living in Damascus. Very quickly their emails to each other get hot and steamy as they exchange intimate naked photographs and engage in cyber-sex. Their connection is also very much on an emotional level and deepens significantly over the coming months.
Amina confides that she is not just ‘out and proud’, but that her father is totally supportive of her sexuality, something of a rarity in the Arab word. She actually starts publishing her own blog ‘A Gay Girl in Damascus’ which is extremely controversial and highly critical of the current dictatorship. It gets noticed around the globe and is followed by other media and progressive lesbians. She was both brave and very articulate and when even heavyweight newspapers such as The Guardian and The Washington Post covered the blog, it went viral. 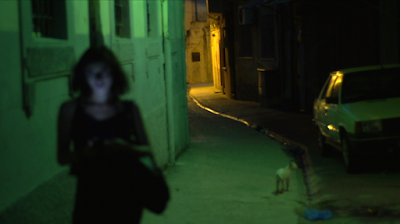 Then one day Amina writes to tell Sandra that the Secret Police had arrested her but thanks to her father’s timely intervention, she was released again. Soon after that Sandra receives an email from Amina’s cousin Raina saying that Amina had been abducted and the family have absolutely no idea where she was being held.  This is followed by a deafening cyberspace silence for some months and Sandra tries everything she can think off to track her girlfriend down to see if she is still alive and see if she can save her. She even lists the help of the US State Department.  However despite all her extensive efforts she starts to draw so many blanks and finds it impossible to get a single lead on her girlfriend who by now is a world famous blogger, and then the penny finally starts to drop, albeit very slowly.

CAUTION: SPOILER ALERT.
There is no Amina.  This bizarre real life true story takes a 180 degree turn when Sandra eventually engages the services of some clever IT geeks who track down the IP address of the computer that Amina’s emails were sent from. It’s not in Damascus, or any other part of Syria but in Edinburgh at an address owned by an American academic Thomas MacMaster and his German born wife. He is the real author of all the emails and the one that had conjured up the fake profile that Sandra had come across on line.  The pictures that he had sent claiming to be the outspoken Amina were in fact stolen images of a Croatian girl living in London. When he was finally exposed, the discovery did not just distress Sandra but infuriated the media who claimed that all the coverage they had devoted to the case had diverted public attention to the horrors of the Syrian regime which should have remained as the main story coming out of that region.
When Sandra eventually gets to have a face to face meeting with MacMaster she never manages to successfully extract from him why he perpetrated this fraud which he admitted had gotten way out of hand. He very unconvincingly tries to pass it off as an experiment in creative writing, but it seems more likely that it was to fulfill some fantasies he had that were possible of a sexual nature.  It is all very unsettling and more than a little bit creepy.
It is in fact the one failing of writer/director Sophie Deraspe, who made this compelling documentary with the complete co-operation and participation of Sandra Bagaris , that she failed to push MacMasters on the whole question of motive which would/should have given some closure on this far-fetched peculiar tale. She also left a few unanswered questions of Sandra herself who she treated with kid gloves as the ‘victim’ of not just the deception but having her heart broken by someone she had never met, and very oddly had not even spoken to via phone or computer.
It is certainly not the first time that anyone in the gay community has been led astray by an online profile that has been ‘enhanced’, but it is usually done by horny gay men looking for a quick hook up for sex, not by lesbians who are totally make believe. Well, one of them at least.
Roger Walker-Dack
Editor-at-Large thegayuk.com / thegayusa.com
Contributor – edgeonthenet.com
Multi-media Reporter – provincetowntv.org