Brit filmmaker Jake Witzenfeld’s impressive and heartwarming documentary thankfully settles down after a somewhat uneven start to become an intriguing snapshot of what life is like for gay Arabs living in a trendy suburb of Tel Aviv today.  He follows three extremely engaging best friends in their early twenties for 18 months through 2013 – 2014 when tensions between Gaza and Israel flared up yet again.
There is Khader who appears to have ‘independent means’ as he comes from what seems to be like a prominent Muslim ‘mafia’ family, and he lives with David his Jewish boyfriend who is a gay nightlife impresario. Fadi on the other hand is an ardent Palestinian and keeps beating himself up for falling for inappropriate handsome Jewish butch men. He calls it ‘sleeping with the enemy’.  Nareem the final one of the trio, is a soft quietly spoken Nurse wreaked with guilt about not being able to ‘come out’ to his conservative traditional parents who constantly pressure him to return to his home village and live with them. 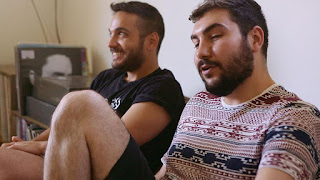 Witzenfeld films the boys taking a road trip together to visit their parents and showing the diverse backgrounds that each in their own way had held the boys back. Nareem’s parents refuse to accept that their adult son has any right to determine his own future and he, and the others, know it is futile to even try and raise objections. Fadi’s mother on the other hand acknowledges how primitive life is in their small Arab village bereft of even a cinema, and that she openly supported and encouraged him to have the life he wanted (and she would have loved) in the big city. Her compassionate speech has Khader in tears confessing that whilst he and his mother were best friends, his father had not spoken to him for years.

Later on one (of the many) drunken nights when feelings were running high and they were all bitching about how tough it was to be both Arab and gay, they decided to make a video.  Khader declared ‘since we don’t have a role model, let’s be it.’  This is the first of several videos they make together which not only gives them a means to help explore the complexities and confusion of the feeling of ‘not belonging’ living in a country they call home. It also shows that despite all their concerns of the volatile political climate, that they also have really such fun together just like other single handsome young gay men.
Most of their other political posturing was usually done with copious amounts of alcohol and cigarettes and led by Fadi who was the most passionate about both his heritage and his unbelievable optimism that Israel could even renounce its claim to his homeland, but even he admits ‘This is our lives, it is very confused all the time’.

Khader is reluctantly persuaded by David to leave his precious homeland to take a month’s vacation in Berlin, but once he is there and sees that there is a whole world outside of the troubled region where life is relatively stress free, he wants to stay.  It’s only the fact that his romantic relationship with David is ending that he eventually comes back home.
What was particularly touching was how they were all there for each other including the girls who made up their circle of friends. As one said to Nareem ‘The question is, and I’m not trying to scare you, you either choose to live comfortably for yourself, or you choose to live comfortably for your parents. That’s the whole point of coming out of the closet.’

What is refreshing about Witzenfeld’s film is that it paints a totally different and more realistic picture of life in the Region than most other gay movies which are either overly romantic dramas which inevitably end in tragedy or are war/terrorist laden plots.  He doesn’t shy away from the vitriol and hate that these boys have to deal with as evident from some of the very outrageous response that their videos received, but he shows that these smart, funny, streetwise boys also have a great time just simply acting their age.  Fadi is also quick to recognize that there are young Palestinians in Gaza having a much tougher life than they have here in Tel Aviv.
The movie works so well because all the boys are so utterly engaging and you very quickly become invested in their outcomes and want to will them to succeed. They seem happiest of all when they are at a dance party in Amman where they are in majority (of Arabs not necessarily gay men) but even then very noticeably the music from Carter USM is ‘So this is how it feels to be small, This is how it feels when your word means nothing at all’.
However, the most surprising revelation is not on the screen at all, it’s the fact that newbie filmmaker Witzenfeld is British and now a Tel Aviv resident BUT that he is also Jewish and straight!  Despite (or because ?) he has made a delightful and impressive wee movie that should be seen by anyone with an interest in gay life in that region. Even more so if you have a penchant for attractive young Arab men.

‹ A Gay Thirty-something Relationship Hits the Rocks in “Like You Mean It” › Holly Woodlawn, Warhol’s Great Superstar, Is In Very Bad Shape In L.A.