Colby is ‘out’ to his family and whilst his mother and his sister accept his sexuality, his father can barely tolerate it and refuses to even discuss it. It’s a pity as Colby now has a steady boyfriend Rusty, who he not only loves but he wants to go into business with too and open a restaurant together.  Neither of then are in the first flush of youth and so their relationship marks the perfect time for them to finally settle down. Colby has shared all this news with the women in his family but has been trying to find a way of breaking it to his father as he fears that he will not accept either Rusty or their relationship. 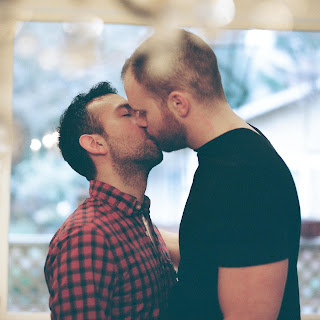 So Colby comes up with a plan to get his father to bond with Rusty in order for him to then be able to share his news without the fear of being rejected.  The plan, not one of the brightest for a situation like this, is to get Rusty invited on their annual trip, but to do this he has to pretend that he is just a straight buddy and a potential business partner.  Dad reluctantly agrees, so then at the last moment Colby rustles up an excuse to keep him from actually going, meaning that in the end Dad and Rusty set off alone together.

Things actually going swimmingly well, so much so that Rusty is so convinced that Colby’s father likes him enough for him to come true about the fact that he is also gay and is in fact his son’s boyfriend. This revelation does not go down at all well and faced with the older man’s repulsion, Rusty gets very angry and tries to get his own revenge by insisting on sharing graphic detail of what he does with Colby in bed, which freaks the father out.
Everyone ends up really pissed with everyone else.  Colby dumps Rusty, the mother is angry that her son’s sex life was exposed by Rusty like this, the father  is anger with his wife for keeping him in the dark etc etc.  To be fair it’s one thing for the father to be such a reactionary to all details of gay sex, but it’s hard to believe that he never ever had any inkling that Rusty was not heterosexual!
This smart and incisive drama written and directed by newbie filmmaker Arthur Allen, who also stars Rusty, plays out very well indeed.  The chemistry between the two middle-aged handsome gay men (Colby is  played by Jake Street) is very tight and touching, and their scenes together are emotionally charged and very passionate.  It is however the bible-loving conservative father who has to run the gamut of all his emotions, who holds our attention most of the time. It is an impressive and powerful performance from Chuck Sigars a comedian and actor in this his first movie role.
Allen includes some great scenes showing all the family dynamics at work here as this is much more than just a father and son drama. It is a very impressive debut movie indeed with its high production values and such stellar acting, and if we were to add any small note of criticism at all then it would be about the slightly too contrived scene at the end to ensure that the story had the happy-ever-after ending that gay audiences in particular seem to love.
Go to:  www.queertiques.com for more film reviews.

‹ The Elton John AIDS Foundation Awards $4.4 Million in New Grants › In Carmel Valley Go to 21 Tasting Rooms Without a Car