Life seems to have been unchanged for ever in this rather boring and isolated Dutch village, but little do its residents know that by the end of the sweltering summer that is about to start, nothing will ever be the same again.  The story that unfolds through the eyes of teenage Annie or “Ms Silent’ as she is better known, and it starts peacefully enough with her biking in the countryside with a pack of other village girls. They alway pass by the Power Station which everyone loves because it provides jobs and even some culture for the entire village. The only other thing that everyone else is passionate about in this devout Catholic community, is the Virgin Mary.
Virgins are generally well regarded and when Ruby one of the local girls is raped by a farmhand he is made to apologize to her by his father and gives her a gift of box of apples (!), and then later a wedding ring when she discovers she is pregnant, even though they are like total strangers. 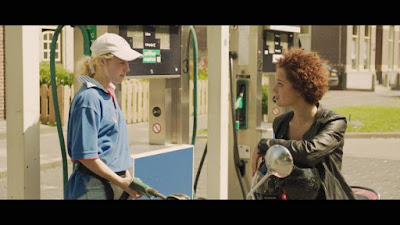 Actually for such a small place, it seems overloaded with more than its fair share of ‘issues’ that most of the residents either just don’t question, or they just choose to simply ignore.  Annie has a dysfunctional misfit family and is probably one of the reasons she chooses not to talk. Whilst attending an art class Annie is confused by her reactions when it turns out that Ruby is the naked model and she really does not know what to make of her feelings.  Before she can even work it all out, the very next day a mysterious leather-clad motorcyclist turns at the Gas Station where she has a part-time job. The biker is Lena a mixed-raced girl who has just moved into the area to tend for her sick mother.  There is an immediate spark between the two teenagers something that Lena acts upon when they next meet after Annie has offered to help her deal with the damage done to her house by some racist vandals.

What is about to commence is a very sweet lesbian coming-of-age-romance but it does gets a tad lost in all the other melodrama that is going on around them which makes being gay not such a big deal after all.  Very good performances from the two leads make this one too watch despite all the other distracting plot lines.
Read more of Roger’s film reviews at: www.queertiques.com.