The true story of the young woman who ruled Sweden as its Queen for a mere 10 years in the middle of the 17th Century has been told several times already, most notable in the 1933 movie Queen Christina starring Greta Garbo. Whilst this early version also touched on how fiercely independent the young ruler was, it failed to address the more important aspect of her sexuality, which this new movie by the veteran Finnish Director Mika Kaurismäki finally does.
Kristina (Malin Buska) .. as she is called in this movie .. inherited the Throne at the age of 6 when her father was killed in battle. Estranged from her German mother, the young monarch is brought up and schooled by the Court’s Chancellor (Michael Nyqvist)  until she is 18 years and can start to rule.  She immediately turns against the advice of the Court and the Chancellor and demands that they all start bringing a speedy end to the Thirty Years War that has divided all of Europe so that they can bring  peace to both the Catholic and Protestant factions. 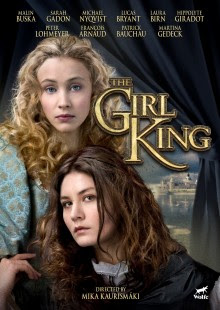 The power crazy Queen angers the Court further by insisting on them adopting all her progressive ideas, and she aggressively sets about making Sweden not just a nation of thinkers but also one of culture too. She surrounds herself with likeminded people such as artists and writers, and obsessed with the writings of Rene Descartes (Patrick Bauchau), she invites the great French philosopher to Stockholm to expound on his rather advanced views. 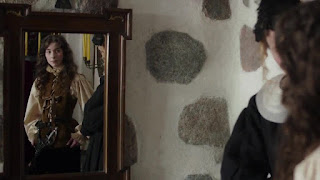 Kristina had always been a tomboy growing up but now she forgoes wearing dresses completely and takes to wearing very manly clothing.  Even this doesn’t seem to throw the bevy of aristocratic suitors vying for her hand in marriage, but Kristina makes no secret that the only person she is going to take into her bed is a beautiful young Countess (Sarah Gadon).

News of her lesbian affair and her moving away from the Country’s Protestant faith towards Catholicism is bad enough for the Court, but the fact that Kristina refuses to marry in order to provide an heir to Sweden’s throne,  is way too much for them to handle. However before they can act, Kristina abdicates and names her own heir, and then goes off to live out the rest of her days at the Vatican as the guest of the Pope.
The story is rich with such wonderful historical facts and endless legends that have been embellished over the years and had all the making for a rather splendid historical epic with a real queer twist, but somehow it just ended up as an uncomfortable mish-mash that teetered between being a Lifetime TV melodrama and a very camp parody. The script certainly didn’t help as it provided some real clangers for the unfortunate cast to have to trot out with conviction. It was probably hampered by the the fact that it had been based on the stage play written in French by Michel Marc Bouchard, which was then translated into English by the Canadian dramaturg Linda Gaboriau, and ended up being spoken by a very international cast for whom English wasn’t their first language. That is very definitely one of the reasons to explain some rather excruciating performances which ranged from being somewhat wooden to really over the top.

The  less we say about the clumsy seduction scene when the Queen has her way with the Countess over the open pages of The Devil’s Bible , the better. On the upside though, the movie is quite visually stunning with some elaborate period costumes and it is all set against some rather wonderful wintry landscapes. And Kaurismäki should be applauded for wanting to tell the story of such an important lesbian historical figure, although it is a pity even he failed to really do justice to her in the end.

‹ Attention LGBT Travelers: A Queer Version Of Airbnb Is Here › How Sexual Addiction Treatment Fails When Working With Gay and Bisexual Men