Filmmaker Aaron Brookner set out to find the lost negatives of ‘Burroughs : The Movie’ a critically acclaimed film made by his uncle Howard Brookner who had died of AIDS in 1989 aged just 34 years old. Before his untimely demise Howard had made just two feature documentaries …..the other one was on Robert Wilson the avant garde Theater Director …..and he had also just shot his first narrative film ‘Bloodhounds of Broadway’ which was in post-production at the time of his death.
The 1983 movie on the celebrated queer writer and Beat Generation poet   William S Burroughs got Howard involved with some of seminal cultural icons of that period including Warhol, and in fact Tom DeCillo was the cinematographer on the film, and sound recordist was a a very young unknown Jim Jarmusch.  It is in fact Jarmusch who now helps Aaron in retrieving Howard’s archives that have remained untouched for years in Burrough’s old windowless basement bolt hole in The Bowery known as The Bunker.  It had all been left in the care of the eccentric poet John Giorno who for some unexplained reason, initially obstructed Aaron in his quest. Once they do get their hands of this wealth of material, Aaron is able to  eventually produce a restored version of his Uncle’s classic film which is later released by The Criterion Collection, and this documentary however is how he got to piece it all together. 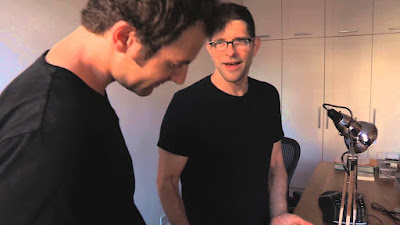 The picture he paints of his Uncle starts with his own personal recollections and all the home movies as the two were obviously very close even though Aaron was still a child when Howard died. Much of the detail is filled in by the writer and English Professor Brad Gooch who was a model back in those days when he was Howard’s boyfriend and they lived a rather bohemian life in the Chelsea Hotel.  Gooch’s own memoir of that time called ‘Smash Cut’ goes into great detail, and now on camera he talks fondly of Howard’s fiery energy and sheer determination to live life to the full, even after he had been diagnosed with AIDS.

It was very fierce tenacity which propelled this unknown kid from Great Neck, Long Island into winning the trust  of the Burroughs crowd, but persuading major actors such as Madonna, Matt Dillon, Randy Quaid and Jennifer Grey into starring into ‘Bullets’ even though it was his first feature film.  There are times when Aaron tracing his Uncle’s footsteps that he seems visibly shocked at the high esteem that Howard was held in by his peers and many others who may have normally been out of his league.

This excellent and very touching profile also serves as a fitting reminder that Howard Brookner was a remarkable and gifted filmmaker,  but also of the wealth of talent and all the other extraordinary people we lost in the AIDS pandemic. Howard refused to take AZT simply because it impaired his ability to make his movie, and that was the most important thing in the world to him, more so now that he knew that his time alive was very limited.

In his farewell note to his parents, who although they had difficulty accepting  his sexuality, they still loved Brad ,  Howard wrote :-
It really isn’t a problem having a short life as long as you have ed it doing exactly doing things that really mattered to you …. and that is exactly what I have done.

Uncle Howard was one of the very best LGBT movies at Sundance and is sure to surface in a Film Festival/movie theater near you soon.