To us non-residents of Harlem the fact that 25 years after  Jenni Livingston’s seminal documentary Paris Is Burning, ‘voguing’ is very much alive in the dance clubs and community spaces in this corner of New York is quite a shock.  In fact it’s been re-shaped and re-invented to bring it more in line with the needs and dreams of it’s present day exponents who, we learn from this new movie, are mainly at-risk LGBTQ youth. There may be much more of a political edge to the stories of the young people who feature in Kiki than in Livingston’s earlier film, but the seemingly unlimited vitality and energy and sheer fabulous creativity is still very alive in the community who take the thriving voguing culture very seriously.
Directed by a young Swedish visual artist Sara Jordenö who  co-wrote the movie with Twiggy Pucci Garcon who is the ‘housemother’ of the House of Pucci and one of the leading lights of the movement. They both take pains to show that what this tight knit community does much more than just creating a safe zone for LGBT youth, as it provides them with an outlet for their energies and talents and a way for them to express their sexuality. Their numbers include an increasing number of trans men and women, and others who are beginning their transitioning. There are some who simply want to retain a fluidity to their sexuality and reject labels in favor of individualistic ‘realness’.
With jobs worse than scarce because of transphobic attitudes and the cost of gender adjustment extremely expensive, many of the kids take to sex work as the accepted norm.  Their conversations regarding dealing with puberty and gender issues without a traditional nuclear family are both enlightening and probably more disturbing to us than it is to them as they generally seem to find the inner strength and the support of their friends to deal with this. 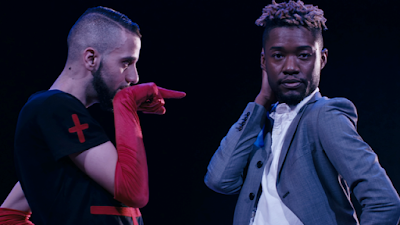 They all belong to a House …. the name for a team who participate in the contests….. and each has a silly pseudo-pretentious name like the House of UnBothered Cartier … and is run by a male housemother. Working as a collective gives them all a sense of community that they can relate too. Being a young person of color is still not easy even in this day and age and in a metropolitan area like NY.  A great many of the house members have to deal with HIV and homelessness, the latter as a result of being thrown out by their families.

The irony is that when one of their number lands a job for a non-profit support group as an advocate for LGBT homeless, he gets invited to Washington for a reception at The White House.  Whilst there in his hotel he gets a phone call telling him that there is another addition to the homeless count.  It’s him.  His Landlord has evicted him without warning and notice.
Whilst the movie suffers for some patch editing, that pales into insignificance of the scenes of all the exuberant dancing and posing which is perfectly electrifying .  On the dance floor all thoughts of troubles disappear and the atmosphere reeks of such positiveness and it gives these young kids the sheer determination to take responsibility for themselves and their futures.  The voguing scenes were filmed over a three year period, and during that time and through their appearances we get to know (and love) many of the regular participants as each tells their story.
The optimism and sheer joy that exudes is highly infectious which is remarkable when one considers how marginalized this rather neglected community is.  During last summer when the country was celebrating the SCOTUS decision that legalized same-sex marriage, one of the Harlem kids remarked without even a hint of malice that it had only happened because middle-class white gays had wanted it.
And another of the interviewees summed it up even better with ‘It’s important that people see this film and know that we are as strong as f–k!   He’s absolutely right, and you would be a fool to miss him and it.