This rather touching and gentle gay drama which is a very impressive debut from newbie filmmaker Sudanashu Saria, takes on an even greater than usual resonance by the mere fact that it is set in India where homosexuality is still illegal. However in fact the movie, evidently shot very much on the down-low, showcases how these gay men in contemporary Indian society seem totally at ease with their sexuality and the story that unfolds focuses intently on their own relationships with each other.

It all starts with Sahil a young music producer attempting to pack his rucksack for his upcoming weekend trip away but he is struggling in the dark as Alex his boyfriend has neglected to pay the electricity bill for their tiny apartment. He had also left the gas stove on which is another reason for the couple to bicker, but by the tone of their argument it appears that they really don’t need much of an excuse to start quarreling.  By the time Alex later drops him at the airport they are barely talking and Sahil refuses to give him a farewell kiss. 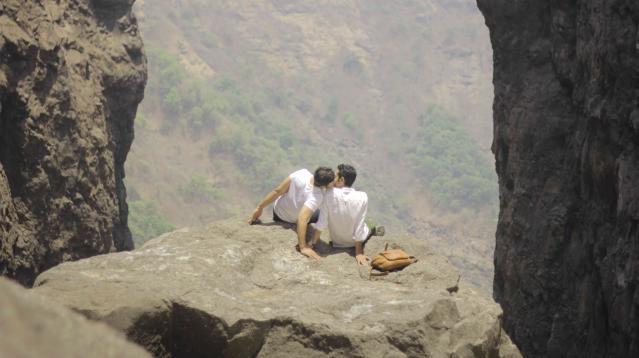 He is at the airport to meet his old friend Jai who is now a hot shot on Wall Street in NY and who has flown back to Mumbai for just 48 hours to close a big deal that he has been working on for some time. Before he has to attend that meeting, Sahil whisks his friend off to the lush Indian countryside for some fresh air and exercise and so that they can catch up with each other. Whilst Jai questions Sahil about the state of his volatile relationship with Alex, he oddly never even mentions his own home life in the US.  They both however enjoy a closeness with each other which seems to hint that they may have had another type of relationship in the past, but as everything is unspoken and hinted at, we are never really quite sure.

It is hard to tear the workaholic Jai away from his laptop and cellphone which causes some friction, but none quite as much as when one night he actually crawls into bed with Sahil.  His advances are rejected, albeit somewhat reluctantly, and the rest of their very short trip in the mountains sees a lot of longing looks from Jai at Sahil ,and although Sahil allows him to steal a kiss, nothing else happens.

Back in Mumbai ensconced in their rather luxurious hotel suite before the meeting starts, matters take an unexpected turn when Jai forces his hand. Shocking as it is, Sahil stays for dinner at which they are joined by Alex accompanied by some young boy who had been keeping him company for the weekend.  The atmosphere during the meal is strained to say the least and it is obvious that Sahil’s feelings for his boyfriend have sunk to an all time low.   Even so, it is nigh on impossible to even guess how the remainder of Jai’s stay is going to work out for any one them and what will actually happen before this night is over.

Loev may have a totally different tenor than a European queer movie but it still strikes a chord with its measured tone and its heartfelt sentiment.  It blends the needs and desires of a gay culture that may be less active publicly than most but it is one which still goes through all the usual dilemmas and highs and lows in its search for happiness and establishing relationships. Saria leaves out several parts of the puzzle of this story to ensure that not everything fits neatly into place, and so that  we can draw our own conclusions along the way.  An added dimension to is that Loev also serves as his own public coming out too.

Despite the nature of the subject of his movie, Saria had no trouble finding local actors willing to taking on these roles. It was as one Casting Agent told him, a rare chance for an Indian movie actor to do more than just dance as that is all Bollywood usually demands of them. He chose well too as both Shiv Pandit playing Jai and Dhruv Ganesh as Sahil put in extremely convincing performances that made the movie work so well.

Loev is a remarkable and delightful first queer Indian cinematic foray and Saria has set an impressive high bar for other filmmakers in his community to aim for.

P.S. One sad note young Dhruv Ganesh died of TB soon after Loev was completed, the movie is dedicated to his memory.