The openly gay Mexican filmmaker Julián Hernández has won the prestigious Teddy Award for Best LGBT Feature Movie from the Berlinale twice, which is an exceptional achievement that has only been matched by the late British auteur Derek Jarman. Hernández’s last feature film (for which he won his 2nd Teddy) and which was probably his best too, was  ‘I Am Happiness on Earth’  and it was typical of his raison d’etre with its sparse dialogue and it’s emphasis on the aesthetics of some handsome Latino men, and very little attempt to include a conventional plot. Now he has extended this forward in a series of short movies mostly directed by him, but one also from his occasional collaborator Roberto Fiesco.
The anthology simply titled Mexican Men is of five encounters that are sensual and seductive and that are the somewhat esoteric results of these two highly imaginative filmmakers.  Fiesco’s contribution “Trémulo” has the nearest thing to a traditional narrative as it tells the tale of young soldier who goes into a small barber shop on the eve of Mexico’s Independence Day.  He spies the young apprentice and so returns at night when the shop is closed off so that they can celebrate the holiday together. 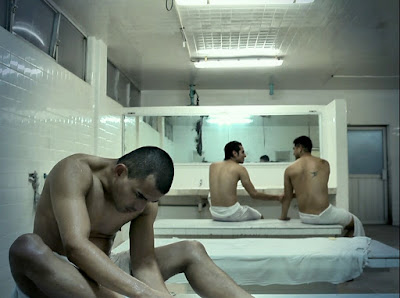 The other three very accomplished short films are : Wandering Clouds : where two men meet up to dance in the water at the local swimming pool but have to deal with an unpleasant homophobe; Atmosphere : an intriguing odd table about a mysterious outbreak; and To Live  : the shortest but most sexually charged of all the tales.