Beatrice (Juliet Stevenson) and her 15 year old son Elliot (Alex Lawther) have arrived at their family’s getaway vacation home in the South of France for one last time.  As the house is now to be sold as Beatrice and her husband are finally getting a divorce, they are there to pack up all its contents.   After flailing around for decades in a marriage for which she confides to her neighbor never ever really brought her much joy, it is time to move on.  Not that she looks any happier at the thought of a fresh start as she always appears so thoroughly depressed and about to burst into tears.

Her humor is not helped by the fact that she has spoilt her only son to such an extent that he is a self-absorbed prig who cannot bear to be in the house with her let alone, actually help with the arduous task of sorting all the possessions out. When he is out having fun just wandering around the countryside he comes across a semi-naked slightly older extremely handsome boy about to go for a swim in the reservoir.  Clément (Phénix Brossard) is also here a visitor to the area but when we discover his dark secret we realize that he is certainly not on vacation. 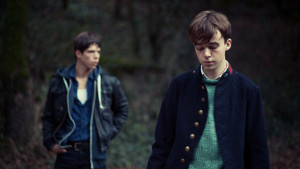 Clément is however quite bemused when he spots how a very earnest Elliot is immediately infatuated with him.  They have totally different natures and in fact Clément teases his new very wordy admirer for being a budding poet ‘such a cliche’ he says. Nevertheless they take to hanging together at Elliot’s house and it does at least mean that Beatrice has finally got a helping pair of hands with all the packing, and someone who is finally nice to her.

On an outing to the nearby town it is in fact Beatrice that steals a kiss from Clément, an incident that Elliot manages to witness, but later on he gets his new friend alone and he is finally permitted to go even further.  By then Elliot’s father (Finbar Lynch) has arrived to ostensibly sign the Sale papers for the house, but before he does that, more family secrets are revealed, and Beatrice gets even more unhappy.

This very gentle drama from Brit theater and TV director Andrew Steggall unfolds at a very languid pace and but somehow it never totally engages you or quite fulfills its promise.  Despite a valiant performance from Lawther (last seen on our screens as the young Alan Turing in The Imitation Game) it is difficult to warm to such an insufferable character, and even harder to appreciate why these two totally opposite young men really would become friends. Stevenson, one on the Uk’s most talented actresses, has been given little to grasp onto as her character is too one dimensional, although at least she doesn’t have to repeat her campy performance of a newly divorced mother of a gay boy that she gave in ‘Food of Love’.

Beautifully photographed and with a delightful soundtrack which does make up for it a little.