Inés’s (Celia Freijeiro) life is always a mess because she simply wants it all.  Or at least she wants to make out with every single good looking girl that she comes across regardless of the circumstances.  We learn this in the opening moments of this hilarious Spanish farce in which it seems that every woman in the world is gay, or at the very least thinking about it.  Inés is at the funeral of the Uncle of her Miami-cop girlfriend when she makes out in the bathroom with her girlfriend’s younger cousin, and then five minutes later is being threatened by a gun-toting Kirsten (Jane Badler) who she has been two-timing and wants revenge.

It all makes Inés realize that it is probably time to leave Miami as things are getting far too hot for her, and so she jumps on the first plane back home to Madrid. The trouble is she also had to leave there in a hurry ten years ago when she jilted Verónica (Cristina Pons) her pregnant fiancée on their wedding day. Once she lands in Spain and  with nowhere to go, Ines  turns up at her exes’s house where there is a party in full swing to celebrate the fact that Verónica’s child Candela (now 10 years old) has just had her first period!

The house is packed with women, most of whom seem to have shared some sort of past with Inés, including the allegedly straight Lola who is now Veronica’s housemate but who was the one who had been caught making out with Inés on the aborted wedding day. Lola’s ex-boyfriend Javier (Ismael Martínez) is there with his very pregnant new wife Blanca (Marina San José), and although he may be one of the few around the table who hasn’t made out with Inés, he has a dark secret that, when revealed, will link him to both her and Veronica.

It’s all very manic and very funny as these very volatile and excitable Spanish lesbians seem to get drawn into these complicated highly dramatic and somewhat silly scenarios which make for great hilarity. Directed by Sonia Sebastián who, back in 2007 created a very popular Spanish web series ‘Girl Seeks Girl‘ which featured several of the same actresses that are in this movie, but now instead of just looking the ‘girl actually gets the girl!

This is one of those fluffy feel-good nonsensical movies where no-one can keep their hands to themselves and life is as much about lust as it is about love.  It all has a way of always ending up very sunny for everyone, and so it should be simply enjoyed for what it is and not be taken too seriously at all. 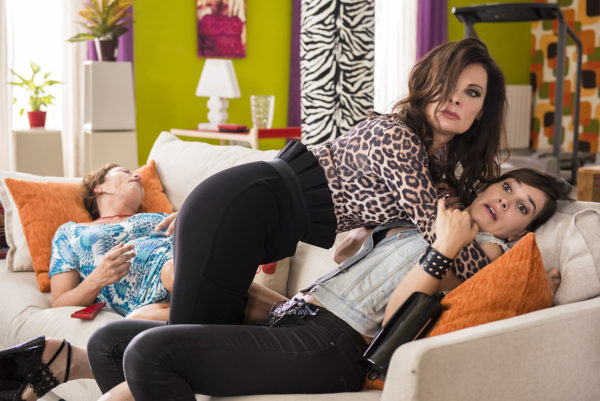