It took the members of G-Voice South Korea’s oldest gay male choir a long time and a great deal of discussions before all the members agreed to this documentary to be made. Most gay Koreans are by nature quite conservative and they are usually reticence to talk about their sexuality, but in this instance as Lee Dong-ha the filmmaker was also a member of the choir, they let their guards down more than normal and seemed to throw themselves wholeheartedly into the project.

Since 2003 G-Voice has been meeting in Seoul every weekend to rehearse. In some cases their enthusiasm far exceeds their musical talents and after listening to some of the scenes of painful caterwauling, it is quite remarkable that somehow they manage to pull off such polished public performances in the end.  The music is of course not the main reason that they enjoy being part of the group, as it gives them all a welcoming and enjoyable social experience which helps counterbalance all the general homophobia of Korean society. 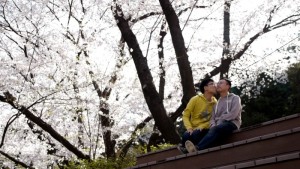 What strikes you from the start is all the infectious good humor and joy especially as they give accounts of all their dating experiences, several of which occur within the choir’s ranks. They seemed somewhat childishly innocent and so are visibly shocked when their cosy life as a group gets a rude awakening when they are being pelted with bags of human faeces whilst performing  at Korea’s first gay wedding.  (Their assailant is a Christian Pastor which is the least shocking part of the whole  incident).

In the second part of the documentary the choir’s political awareness steps up a notch or two and they go and sing in support of a steel workers strike.  Then when their attempts to be part of the 15th Korea Queer Festival Parade are halted by hoards of very angry Evangelical Christians defiantly sitting down in the streets of their route blocking they way, they are resigned and annoyed.  What is remarkable here is that despite the hours they stand there unable to proceed, and  with non-stop vitriolic abuse hurled at them, there is not even a hint of retaliatory violence which would probably occurred in western countries faced with a similar situation.

The point of the film is to celebrate the 10th Anniversary of the Choir with a spectacular concert which turns out to be quite a magnificent event albeit a very camp extravaganza.  They proudly write and produce all their own music and sing enthusiastically ‘dream the undreamable, reach the unreachable,’ and  I think they’ll manage to do that quite easily.

P.S. The movie won a Audience Award at the Berlinale earlier this year

ZipLine Improv at Occidental Center for the Arts October 1