This rather enchanting Brazilian dramedy is about three smart urban professionals who are not only best friends, but also neighbors in a trendy São Paulo apartment building.  As they are also very self-absorbed, it is no-wonder that all three of them are having relationship issues with their partners.

Julia (Maria Laura Nogueira) hates confrontations and so has chosen to ignore the fact that her boyfriend has been two-timing her for years, until she is left with no other option than dump him when she catches him red-handed, but by then she is pregnant with his child. Her unhappiness is also exasperated by the fact that although she loves her job assisting a famous fashion designer, she is the last one to accept that she has no talent at all even after her employer fires her. 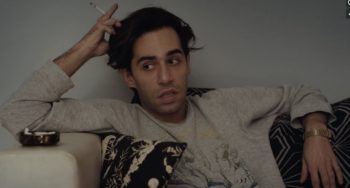 Diego (Brazilian rock star Thago Pethit in his first acting role) is a DJ who likes to party as much as he can and even though he has the sweetest boyfriend who he adores, he still cannot keep stop playing the field every time a handsome man comes onto his radar.

On the other hand Micaela (Renata Gaspar) wants to move her year-old relationship with her bisexual actress girlfriend up to the next level, but self-centered Maria cares much more about keeping strictly in the closet because of her career and her friends.

The three of them spend most of their spare time together drinking copious amounts of alcohol and trying to advise each other how to move their lives forward.  After she has dumped her boyfriend and before she discovers she is pregnant, Julia has a night of wild passion with one of Diego’s DJ friends which puts a big smile back on her face until she discovers he already has a girlfriend. Diego is studiously avoiding the phone as his estranged family are trying to reach him as the father he loathes is dying. Then to top it all when he gives his patient boyfriend an ultimatum to accept him as he is or leave, he is devastated when the boy choses the latter.  Meanwhile Micaela is banging her head against a brick wall until she eventually realizes that she has given Maria one to many last chances, and that she will never publicly recognize her as a girlfriend.

This very contemporary and entertaining story adeptly handles how through all the trials and tribulations with our romantic relationships …. as well as our paternal ones too…. our very close friendships not only sustain us, but are so often the richest element of our lives too. This intriguing story is an impressive directorial debut from writer Vera Egito who has the good sense to resolve all the strands of the story to give them all a very welcome happy conclusions.