“Me, Myself, & Her” Stars Two of Italy’s Biggest Actresses as Lesbian Couple

When you read that the Italian writer/director of an LGBT movie has actually been threatened with ex-communication by the  Church,  and that the Catholic Press has even refused to review the film as it is causing so much offense, then you suppose that it must be so racy/edgy that you are in for a real treat.  In this particular case you would be sadly so wrong, and after sitting through 90 mins of Me, Myself and Her, the only offensive thing about it this very dated and cliched story is that it really is simply too boring for words.

It’s a simple enough story.  Two very glamorous and successful women in their 50’s have been living as a couple in their fashionable apartment in Rome for the past 5 years.  Marina owns a very upscale fast food restaurant and is a former film star too, whilst Federica runs a trendy architectural practice. We’re not sure of Marina’s past love life, but Federica was once married and has a grown up son, and she is still very deeply closeted and refusing to accept that she actually is a lesbian.   It therefore doesn’t sit well with her when Marina mentions her by name when she is profiled by a major magazine. 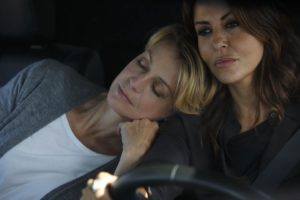 The article is published the same time that Federica runs into an old male flame who happens to be an eye doctor.  She visits his office to get an eye test, and then visits his apartment to get a great deal more.  She is of course found out, and then there is a major drama with Marina issuing her with an ultimatum. We are never sure which way the decision will go as apart from the fact that the share a bed together and both seem to like their rather glossy vacuous lifestyle, they actually have very little in common. Marina for example is full of love and light and positively exudes happiness, whilst Federica just seems hell bent on making everyone in her life as miserable as she is.

Its one (and only one) redeeming feature are the two lead actresses Margherita Buy and Sabrina Ferilli who are in fact major stars in Italy, but even they couldn’t help but drown in this wince making script.

What was also surprising is that this is only the second ever Italian movie based around a lesbian relationship.  So maybe based on this one, maybe they should wait before they think about rushing in and make the third one.