Canadian filmmaker Stephen Dunn’s tale of a young gay man’s coming of age story is one of the most imaginative and insightful movies in that genre we have seen in quite a while. Set in his native Newfoundland it’s the story of Oscar (Jack Fulton) who at the start is a relatively happy 8 year old whose seemingly idyllic life is suddenly brutally interrupted when his parents announce they are going to get  a divorce.  His mother (Joanne Kelly) is moving out which makes the situation even worse for Oscar who is then fobbed off with a gift of a hamster intended as some sort of consolation.

He names his new pet Buffy and he soon discovers that as she is in fact his ‘spirit angel’ and can actually talk, and over the next 10 years becomes the Oscar best friend and confidante.

One day after school he witnesses three older boys hitting the living daylights out of a fourth.  He follows them as they drag the screaming boy into the cemetery where they are bent on doing even more harm to him,  and Oscar grabs a wooden stake intent on help defend the boy when his assailants rush off and leave him half dead.  When the viscous attack makes the TV evening news, his father (Aaron Abrams) tells him that the reason they had beaten the boy up was because he was gay. These are words that will stick in Oscar’s memory for years as he eventually tries to come to terms with his own sexuality.

Fast forward 10 years and Oscar (Connor Jessup) has developed into a creative and talented artist who has applied for a place at a school in New York to study cinematic make-up which he has been practicing on his patient best friend Gemma (Sofia Banzhaf)  for years.  His mother has remarried and now he has two siblings but he doesn’t feel that he that welcome in their family unit,  so he has an uneasy truce with his controlling father who still will not even give him a front door key and who insists on giving him a rude to work everyday.  Oscar has a job at a large DIY store for which he shows no talent for at all.  His patient boss tells him that all he has to do whenever he sees a customer holding a product just say ‘that’s a nice one’ as she is convinced that suits most situations.

What may suit Oscar however is Wilder (Aliocha Schneider) who is one of his co-workers about his own age and who is not particularly nice but is very hot looking and Oscar can hardly stop starring at him. There is obviously some sort of connection between the two young men but Oscar is too unsure about his own sexuality and feelings to ever want to try and find out more. 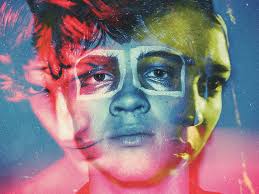 That is however until the day that they both get laid-off from the Store and Wilder announces that as he is leaving to go to Berlin for a few months the next day, his roommates are throwing a farewell/Friday the 13th party for him.  Deciding to accept his invitation, Oscar is tries to pick out a costume from his closet which still contains all his mothers old clothes as his father had stubbornly refused to hand over to her.  He is caught in trying on her clothes by his slightly drunk father who suspecting Oscar may be gay, starts a fight which ends badly when Oscar pushes him over into the closet.

Partying too hard, Oscar is in no fit state to go home, so he and Wilder end up in his childhood tree house that he still escapes too especially when his father has one of his temper rages. Together in bed and half naked the conversation soon turns to sex with Wilder urging Oscar to just accept who he really is.

Asides from the main thrust of the story of this very likable young man trying to get beyond his dysfunctional parents as he matures, Dunn insists on putting some unexpected plot twists that not only serve to keep us on edge until the very end, but helps make Oscar’s journey of self-discovery such a compelling one. Well acted, particularly by Jessup as the young lead, and especially by the hamster too, who was played by none other than Isabella Rossellini, who actually gets the last line and the last laugh in this rather delightful movie.

“Closet Monster”  will be shown at Frameline 40 Monday, June 20 at 9:15 p.m. at the Castro Theater in San Francisco