Veteran French filmmaker André Téchiné may be the wrong side of 70 now but he shows in his latest movie that he still has a very firm grasp of the sensibilities of teenage boys coming of age. He is perfectly assisted by his co-writer Céline Sciamma the writer/director of quintessential adolescent gay movies such as Tomboy  and Girlhood.

This is the story of two strikingly different high-school boys living in the French Pyrenees.  Damien (Kacey Mottet Klein) is a pale effete boy who sports a diamond stud earring and excels at his academic work and cooking and self-defense. Tom (Corentin Fila) is a a biracial boy living with his adopted parents in a remote mountain farm that entails a 90 minute journey by foot and bus to get to school every day. He is determined to train to be a veterinarian when he graduates, but his school grades are so poor that he may have to abort that ambition.  It seems that the only thing that these two total opposites have in common, is that they are both unpopular with their classmates and are always the very last two to be picked to play basketball.

For some unexplained reason the two boys loathe each other, and soon end up actually fighting in the school yard which almost gets them expelled. Unaware of this Damien’s Doctor mother Marianne (Sandrine Kiberlain) has to pay a house call on Tom’s mother Christine (Mama Prassinos) who is pregnant. As she has a history of miscarriages, Marianne has her hospitalized , and then suggests that Tom move in with her and Damien so that he can been close to both the hospital and the school.

This arrangement only serves to antagonize both boys who since their second warning by the School Principal have promised not to fight again, so instead they agree to sneak off into the mountains to battle it out once and for all.

They are both young men of few words and although they have a problem discussing how they feel, there is obviously a great deal of sexual tension just lying beneath the surface.  Hate in this case, covers love, and when Damien eventually finds the courage to speak up, he tells Tom  “I don’t know if I am into guys, or just you”. 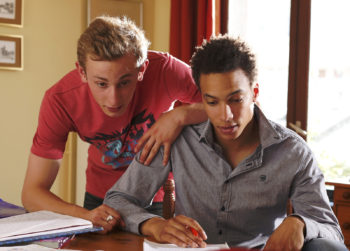 Téchiné never ever lets us in as to where this relationship will lead too until the very end, but this uncertainty runs true because both boys are constantly struggling with recognizing their own sexuality.  Both sets of parents are distracted …Tom’s by the impending birth, and Damien’s with his army helicopter pilot father becoming a casualty of the war in the Middle East … so the boys must deal with some of the more awkward aspects of growing up on their own.  To their defense, they actually do quite a good job of it.

Superb performances particularly from young Klein and Fila, with the latter actually making his movie acting debut. The chemistry literally sizzled between them even when they were so angry with each other and seemed so removed from fulfilling the passion that was causing all this angst. Sandrine Kiberlain the two time César Award Winner (+ 6 nominations) was pitch perfect as the well-meaning mother who deals with an ever absent husband by relying so much on Damien as an outlet for her own feelings.

And then of course there was the very dramatic mountain settings that we first saw in the middle of a brutal winter ending up in a glorious summer.

Being 17 is nothing less than a superb coming-of-age story that is completely riveting to the very last frame, and will probably be come to be recognized as possibly Téchinés best movie to date.