After Saar Maoz an utterly charming 40 year old man served as a paratrooper in the Israeli Army, he was kicked out of the Kibbutz where he had been living with his large extended family for being gay, so he moved to London to begin again and look for the love of his life.  Now 18 years later, his ‘forever’ boyfriend left after three years and the very untamed man that took his place lead Saar down a wild and indulgent path which resulted him being diagnosed HIV+. With his conservative religious family back in Israel struggling with their very judgmental opinions on what they consider are the consequences of his ‘life style choices,’ Saar finds a replacement for them in the shape of the London Gay Mens Chorus where the other members give him the unconditional love and fellowship that he so desperately needs and wants.

This new heart-tugging documentary from the Israeli filmmaker Heymann brothers follows Saar for about a year as he seeks to see if can, or even wants to, effect any meaningful reconciliation with his family back home.  We see him sitting in his small North London apartment trying to hold back his tears as he reads an old letter from his very macho military father that is full of anger and denial about Saar’s sexuality that was the start of him wanting to disengage from the family. Yet later when his mother comes to London on her own to visit Saar who is her eldest (of seven) child. her love for him is muddied by the fact that the Torah tells her that homosexuality is wrong and should be punished by death. Also she is worried that as Saar’s life expectancy may be limited, they should all be spending it together. 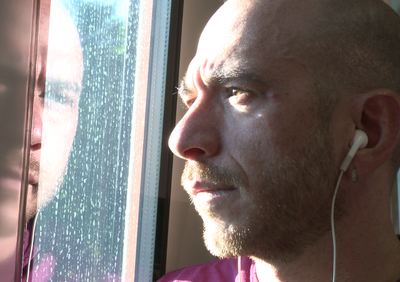 When Saar then goes back to the Kibbutz for a nephew’s Bar Mitzvah, his family who have albeit ostracized him, now openly express their very hostile opinions on both Saar’s sexuality and his diagnosis.  It is mainly based on sheer ignorance but also on a their basic desire not t0 want to even try to understand Saar’s point of view or any real facts. To his credit Saar reacts calmly and tells them that their claim about him ‘abandoning’ his family, and they in turn have chosen to all but ignore him too beyond the occasional phone call. The filmmakers linger on these scenes so that we get the full sense of the arguments, and so that they very carefully ensure that they are seen as being totally bipartisan.

As the story unfolds we see that asides from one rather impossible brother, that everyone moves to more of a central position, and when the Saar’s father visits London, there is a very definite warming between the two men as they try and understand each other more.

As Saar realizes that his pull to both his family and his homeland is far stronger than he had ever realized, he knows that making choices about the next stage in his life may mean leaving the other family who have always accepted him un-conditionally ….the London Gay Mens Chorus.

How the filmmaker ever persuaded the very unpretentious Saar Moaz and his very reticent and conservative family to even agree to make this documentary is a source of amazement, but we should be so very pleased that they did. This excellent film is so compelling and completely engaging that it deservedly picked up the Panorama Audience Award at the Berlinale earlier this year.  Plus by the time the final credits role,  the title becomes rhetorical as there is no doubt that besides his family, there will be plenty of offers of love for Mr Moaz.