Middle-aged Armando (Alfredo Castro) is a rather solitary dental technician who cruises the streets of one of Caracas rougher neighborhood looking to pick up teenage boys.  He is more of a voyeur than a fornicator as he lures them back to his apartment with a thick wad of cash just to have them undress whilst he masturbates. There is no touching involved and very little talking. However when he picks up a rather angry petulant boy called Elder (Luis Silva) he doesn’t even get this far, as the boy hits him over the head with a heavy object and storms out taking the cash.

This doesn’t stop an obsessed Armando who returns to the street corner Elder and his gang of petty criminal mates hang out aimlessly for most of the day. This time once back in the apartment, Elder refuses to remove his clothing and just takes the money and leaves without exchanging words or blows.  This hardly stops Armando who, besides running his successful business seems to have very little else going on in his daily life, but when he goes to seek out Elder again at his usual spot, he cannot find him. After asking around, he discovers that Elder has been severely beaten up by his girlfriend’s brothers for some reason we never discover.

Armando gets a couple of other boys to help him take the comatose Elder back to his apartment and hires a nurse to help him recover. When the boy eventually comes around a  few days later, he is both angry and confused. The big chip on his shoulder appears to be less about Armando’s sexual expectations of him, but more of the fact that his father, now serving a jail sentence  for murder, used to abuse and beat him. When the two discuss parents Armando reluctantly confesses that his father is still alive, but for some reason which he never shares, he states that he wishes he was dead. 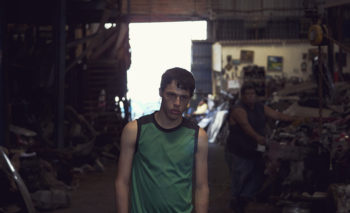 Elder is obviously conflicted with his feelings towards Armando and although we sense he may be starting to very slowly appreciate his kindness, he still cannot stop his old habits, and the moment Armando steps out, he searches the apartment looking to rob him. However he gets caught prompting Armando,  who is a man of few words at the best of times, harms himself to just to show Elder that whatever the boys  gets up too, he is even tougher. Then he throws Elder out.

Now the tables are turned and he is back on the rough streets Elder quickly realizes what a cushy number he had with Armando, so he  returns and begs forgiveness. The once surly boy now starts opening up and sharing with Armando, but he in turn still seems to want to retain his secretiveness and privacy. Misreading the signals, Elder takes Armando to a family party and when everyone assumes that the two man are a ‘couple’, rather than getting upset, Elder offers himself up physically to the older man which is not what he wants.

This powerful and totally riveting drama is a very impressive feature debut from Venezuelan writer/director Lorenzo Vigas. It has this rather gasp-making ending which totally catches you unawares, and the movie deservedly won the prestigious Golden Lion Award at the Venice Film Festival. It’s less of a coming-out story and more of a coming of age for both men who have unresolved issues with their fathers that has had such a deep negative effect on both of their lives.  The lack of finite detail of the causes of their distress is unimportant, but we do know that they must be extremely dire, particularly for Armando who obviously blames his father for the deeply unhappy life he now leads as a result.

Superb performance from veteran actor Castro  as the closed-off Armando, but young Silva ,who Vigas literally picked off the streets to play Elder who has to mature before our very eyes, was phenomenal and so completely natural.

Look Afar is a wonderfully thought provoking movie about an intergenerational battle of wills where there really can be no real winner.

“From Afar”  will be shown at Frameline40 Wednesday, June 22 at 7:30 p.m. at the Victoria Theater in San Francisco.