Jonathan (Jannis Niewöhner)  is a broody blonde boy who has taken over the responsibility for running the family farm in a remote farm in rural Germany which he balances with caring for Berghard his very sick father (André Hennicke) who is dying  of cancer. The two have never been close and have an uneasy relationship and even now that his days are obviously numbered, the father still refuses to tell Jonathan about his mother who died when he was a mere boy.  Now 24 years  old Jonathan is about to accidentally uncover some of the very many secrets that his father, and Martha his maiden sister (Barbara Auer) who lives with them, has been suppressing for years.

The only release that Jonathan seems to get from his very arduous long working day and all the unresolved tension,  is with his father’s new pretty nurse  Anka (Julia Koschitz) who  is more than happy to see to the son’s sexual needs too. This is a little surprising as up to that point Jonathan has been stripping off his shirt so often and flexing his rather buff body in such a homoerotic way that we had expected him to prefer boys. However the twist in this drama is that it reverses the more traditional intergenerational conflict and one of the major secrets that is eventually revealed (the plot moves along at quite the snail’s pace) is that it is in fact the father who is gay, and it is his ex-lover Ron (Thomas Sarbacher) who turns up totally unexpected on their doorstep in order to spend these last few days with him. 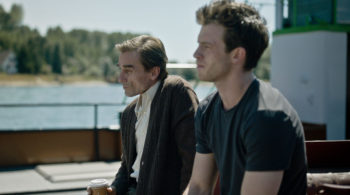 Jonathan is undoubtedly cute but not the fastest off the blocks, and it actually takes him a while to cotton on to his father’s true nature and when that triggers off  uncovering some (but not all) of the household’s mysteries it all gets a tad melodramatic.

The movie is the debut feature from Polish-German writer/director Piotr J. Lewandowski and he has made this intriguing family saga,  that is both a coming of age and a coming out drama, a real visual treat.   There is both the very beautiful country setting, and also the fact that from the moment he meets Anka, Jonathan just simply cannot keep his clothes on at all. The scenes between father and his old lover too are particular affecting.

Despite the very slow way that it unfolds, this is quite a compelling tale as father and son try to reconcile, and much of the credit is due to the two very effective performances from Niewöhner as the rather volatile Jonathan, and Hennicke as the very sick Bergard desperate to finally seek some peace.

Film Review: “I Care A Lot”