The legendary gay activist and writer Larry Kramer always takes great pains to state that how as a community we need our history ….. and he is not just talking about the tome he published last year The American People. It’s a topic that is very dear to queerguru’s heart especially now that several of the struggles for equality have come to fruition, and there is a real danger that some our new freedoms will make us somewhat complacent and start to forget the fearless brave pioneers who made them all possible.

This new wonderfully uplifting documentary from filmmakers Jonah Markowitz and Tracy Wares is the remarkable story of the first four openly gay members of the Californian Legislature whose fierce determination to get some basic LGBT rights were crucial milestones in the continuing journey to full equality. The four were all women Sheila Kuehl who was first one to be elected to the Assembly in 1994, followed by Carole Migden, and then later by Christine Kehoe and Jackie Goldberg.

Each of them proved to be a very shrewd political operator as they introduced Bills piecemeal to stop discrimination a little at a time, which was no easy feat given the rigid opposition that they faced. We can see through all the revealing archival footage in the documentary all the horrifying and shocking hostility hurled at them mainly from the extreme rightwing  faction of the male dominated Republican Party who just loved to enter the Chamber brandishing their bibles.

It is difficult to comprehend why these God-fearing elected officials stood up to oppose bills presented by these women that were aimed at making schools safer for LGBT children, or making it illegal for people to be fired for being gay.  This was just 15 years ago and it is hard to believe that even in a so-called enlightened State like California, homosexuality was still being compared to necrophilia, pedophilia and even to the mating habits of one Assemblyman’s heifer cows! Never at a loss to defame a community that they hadn’t the faintest idea about, one official declared homosexuality as “the most dangerous lifestyle in America… far worse than smoking or driving without a seatbelt.”

This all makes for compelling viewing because these extraordinary women had the courage of their convictions to be openly gay politicians when that just wasn’t done, but also because they are very warm and witty women too.  They had to become much more than mere spokesmen for our community and often be our ambassadors too. Carole Midgen couldn’t help herself telling the story when Dianne Feinstein as Mayor of San Francisco wanted to be au fait with a glossary of gay terms, and meekly asked what a glory hole was!

As a piece of history the movie is essential viewing, and is probably one of the best LGBT documentaries of the year. Carole Midgen downplayed their major contribution with her own modest summary ……..I just wanted to make a footprint of earth to help generations to come.  She, and the others, certainly did that and so much more.

“political Animals”  will be shown at Frameline40 Sunday, June 19 at 11 a.m. at the Castro Theater. 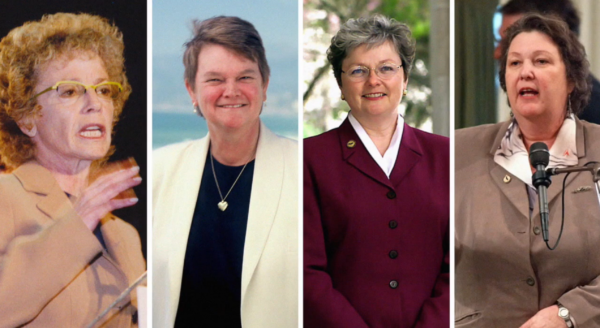