Moises Serrano is 24 years old.  He has lived in North Carolina for the past 22 1/2 years and is as American as apple pie. Except that he is not. His parents smuggled him and his two sisters across the Mexican border when he was just a baby, and he has been treated by the US Authorities as an undocumented resident ever since. He has also never really fit into any of his peer groups throughout his life.  As he explained,  as a light skinned Mexican he had trouble assimilating with either other immigrants or the local caucasians, and the fact that he was also small and  gay made him even more of a misfit.

On the brink of suicide in his darkest moments when he was 21 years old he discovered that he had a ‘voice’. and all the indignities and inequities that he, and other undocumented residents came up against,  now spurred him into fighting for justice. Suddenly this young man with just a basic high school education who had been barred from attending community college, had limited job opportunities, unable to get a driving license and concerned about being picked the authorities, became an outspoken activist. As the anti-immigration climate worsened with the rise of the Tea Party (the Klu Klux still hold meetings in his town)  Moises,  at a great personal risk, helped establish El Cambio, an organization committed to immigrant and migrant rights in North Carolina. Then there was no stopping him in as he found himself giving keynote speeches in schools, to community groups, local business leaders, city councils etc etc. 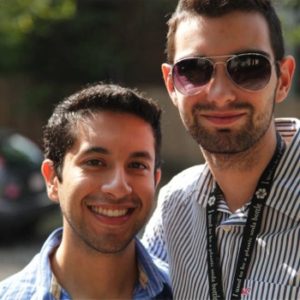 At the same time he also fell in love.  It turned out that there was (literally) one other gay man  in Yadkin County the rural backwater Moises lived  in, and luckily Brandon turned out to be the perfect boyfriend.  His new relationship is one of the reasons that Moises story goes from despair to one full of hope and a bright future, as he also lands himself a fully paid scholarship to a Liberal Arts College in N.Y.

He is one one of the lucky ones though. As  federal and local politicians continue to reject any reasonable approaches to improve the lot of young undocumented residents and they actually bring in more draconian laws and practices then most undocumented residents  such  as Moises’s tax-paying law-abiding parents, will always live  in real fear of losing their very existence and maybe permanently separated from their families.

This new documentary from filmmaker Tiffany Rhynard  is the sheer joy that it is as Moises is this extraordinary selfless young man who is so passionate and emotional about every aspect of his life.  Whether it be when he is on his soapbox demanding rights for his community, or nervously opening the letter from School to see if they will give him a scholarship, or just  the coy way that he responds to Brandon’s acts of tenderness.  He put the welfare of others before his own personal needs for so long, it just feels right that by the end he is making headway in both.

Forbidden is one of those wonderful feel-good movies that makes you appreciate that as long as there are Moises Serrano’s in the world, there is hope for all of us.