It seems very apt that this highly emotional documentary that tells the poignant stories of 8 gay men who are long-time AIDS survivors is the work of The South Francisco Chronicle as it is Northern California’s largest newspaper and as such was always reporting more than most from the front line of the pandemic.  Since 1981 when the first death was recorded in the city, some 20000 people in the City, mostly gay men, have died from AIDS. The film, the first one that the paper has ever produced, is part of a larger special report featuring interactive digital and print features by Chronicle reporter Erin Allday.

When these eight men were diagnosed back in the 1980’s all the medical advice they were given was ‘prepare to die very soon’, but they didn’t, and instead they had to sit by helplessly as their lovers and all their friends faced excruciating deaths instead. “By the time they died they were ready to let go, but I was never ready to let them go” said one very plaintively.  They were all unprepared to survive the fierce regime of drugs that has left its marks …..one has neuropathy as a result.  Now friendless and alone and approaching senior citizenship but without any of the usual savings or nest eggs,  and with their disability allowances about to be drastically cut, they face major financial problems too.

Two of the men are partnered again, but for the most part what comes over in this very compelling film, is the overwhelming feeling of sadness from them. The tagline of the film sums it up beautifully  “They had the remarkable luck to survive AIDS, and the brutal misfortune to live on.” One of men professes that there is not been one single day in the past three decades that he has not thought of suicide. Another is struggling to come to terms that he has been evicted from his home of 30 years on Castro and now he has to move to a trailer in Palm Springs as he simply cannot afford to stay in the city.  He actually dies before the film is completed.

From whatever standpoint you come from, this movie is very tough to watch.  It makes you remember those that we have personally lost to the epidemic and how we would have so loved them to have survived too.  It also brings you up sharply to know that these eight men represent a whole generation that are now having to come to grips with the fact the virus didn’t kill them as 50% of those with HIV/AIDS in the US are now (mainly men) over 50 years of age.

The documentary written, produced and directed by Erin Brethauer and Tim Hussin does its best to end on a positive note at a Dance that has been mounted for the long-time AIDS survivor community (there are some 6000 in SF) and for one brief moment they forget their worries and just go with the music.  It gives them, and us, some hope. 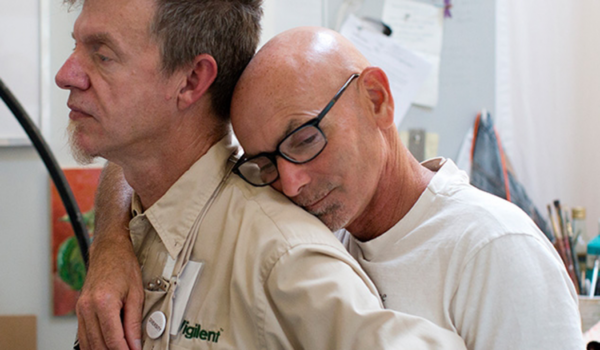