Forty-something-year-old Dan’s (James Roday) life seems to be at something of a crossroads. He is a long time AIDS survivor who has been HIV positive for some 22 years, a fact that he is still reluctant to admit too even though he lives in San Francisco. He is an author suffering from writer block so gets by working as a bouncer at his friend’s run down club where Dan also still insists on hosting a weekly Poetry Slam even though no-one ever shows up.  Well, that is accept his roommate/best friend Paula (Robin Weigert) but then she has her own issues as her attempts at dating are so abysmal she now lavishes all her attention on the pet monkey, Dan bought her.

Dan’s mother, a voice at the end of very regular phone calls always expressing her maternal concern, mails him a $100 check for his birthday which unwittingly disqualifies him for his vital medical insurance for his expensive drug regime as such is the banality of the system.  He will be able to get back on in a few weeks time, but meanwhile he is expected to find his half of the prescriptions which comes to $3000 which as he is rather broke, is not going to happen. Faced with no real alternative plan he just keeps visiting the Pharmacy everyday in the hope that he will be served by a different counter clerk who will not bother to check the validity of his medical card.

Meanwhile his boss/friend (Danny Glover ) at the club is having his own dramas since his wife (Khandi Alexander) threw him out after their most recent row and so Dan steps into help to resolve the problem for him.  Plus he keeps bumping into Mike (Tom Riley) a very good looking blond man in the neighborhood who holds out the promise of a relationship, something that Dan has avoided since his late partner died a few years ago.

This is filmmaker Tom E. Brown‘s first feature length film so it was a brave decision to make what he labels as the first ever AIDS comedy, but as he succeeds so admirably, it was a good call after all.  He cleverly focuses on all the varying dimensions of Dan’s different relationships which, like many gay men, consist of a birth family and also his family of choice that he has collected over the years. Brown imbues each scene with a strong vein of ridiculously funny black (ish) humor that really succeeds in finding the comedy in Dan’s haphazard life without continually focusing on why he needs to keep taking all these now elusive medication.

He chose his cast wisely, and the chemistry between Roday as Dan and Weigert as Paula was pitch perfect, and made one wish that we saw the really talented Weigert forsake the small screen for the big one much more often in the future.

It’s not easy to categorize Pushing Dead, which is currently playing LGBT Film Festivals,  other than to say that it is a very funny quirky wee movie that was beautifully made, and so deserves to find its audience. 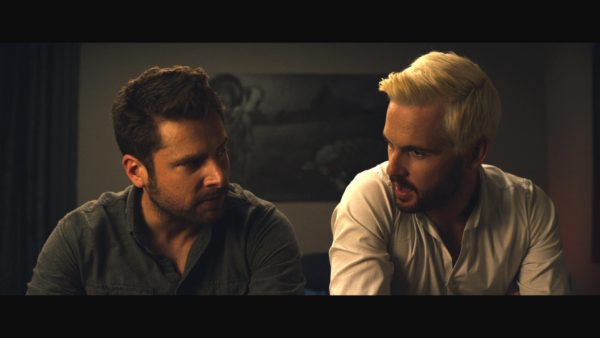