Delphine (Izïa Higelin) is one of those very practical country girls. She lives and works on her father’s farm in the South of France where her days start well before dawn and always finish long after dark.  Her father is concerned because she has now taken to going for long walks late at night, and without a boyfriend in sight, and he worries that she will end up all alone. She isn’t actually alone as her nocturnal excursions are to the nearby village where she has been having secret trysts with a local girl, but that is about to end as the object of her affection suddenly announces that she is following her parents wishes and about to get a husband.

The next thing we know a dejected Delphine has hopped on a train to Paris and finds herself a clerical job and an apartment so that she can see what life is like in the big city.  The year is 1971 and Paris is in the throws of mini-sexual revolution with feminist students on the rampage demanding women’s liberation, and Delphine accidentally gets caught up in one of their political action one day, and she is instantly smitten.  Not so much with the cause itself, but more with one of their very energetic and vivacious leaders called Carole (Cécile De France).

Delphine joins the women’s group weekly meetings just as a means to get closer to Carole whom she is horrified to later discover is straight, and worse still, has a live -in boyfriend.  A deeply disappointed Delphine just bides her time until she can persuade a curious Carole to respond to her advances, and when she finds Carole more than likes it and is also falling for her, the two women both become ecstatically happy.  There is of course the small problem of the boyfriend who Carole feels the need to confess all too, and then on top of that, Delphine suddenly hears that her father has had a stroke and she has to rush home to run the farm in his absence.

Back home Delphine retreats to the very back of the closet again and is paranoid that her deeply conservative mother and the small-minded patriarchal farmers in the village will discover the truth about her sexuality.  It gets even worse when lovesick Carole comes to visit and she is not nearly discreet as she should be. However it is inevitable now with her father totally incapacitated Delphine will have no choice other than to make some difficult choices.  She was brave enough to steal Carole away from her boyfriend, but does she really have the courage to go even further, and will she let her head rule her heart or vice versa? 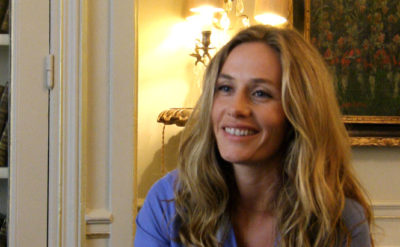 Even with the students demanding change in Paris, the movie succinctly reminds us that in the early 1970’s being homosexual was still far from being acceptable as evident by the fact that one of the group’s projects was rescuing a friend from a mental institution where he had been committed just for being gay. This rather compelling story is not just about coming to terms with one’s own sexuality and finding acceptance in society, but also that when you still live in the shadows having to choose between people you love, is never an easy choice.

Directed and co-written by Catherine Corsini this rather splendid romantic tear-jerker benefits from the performance of the very enigmatic De France who is also exceptionally beautifully which is a very big asset in a movie which has far more than its fair share of very explicit nudity.

“Summertime” will be shown Friday, June 17 at 6:30 at the Castro Theater in San Francisco.