Film Review: “People You May Know”

The title of this new (mostly) American dramedy from Spanish filmmaker J.C. Falcón is taken from FaceBook which frequently proffers up suggestions of new friends.  In this instance it serves as means to tell Joe (Sean Mather) the protagonist, that he has been ‘catfished’ : the delightful term for someone who has been lured into a relationship by means of a fictional online persona.  More of that later.

Joe and his three best friends are now in their late 30’s and are reaching a point in their lives when they each will be confronted with some major unexpected developments which will require change and making choices, and this story is essential how they respond and decide which path they should take.

Delia (Andrea Grano) and Rodrigo (Nacho San José) are married and have just discovered why Delia cannot conceive before Rodrigo gets a posted to Spain for his work for a few months. Nerdy Herbert (Mark Cirillo) has almost given up on having a boyfriend and after a trip to a Psychic he’s trying to do different things as she told him he’ll meet the love of his life in the most unexpected place. Joe meanwhile has been having a secret online relationship with Tom which so far has consisted of cyber-sex, and a very vivid explicit dream, as they have never met.

With Rodrigo out of the picture, the other three friends have a wild night of drinking and drugs after which Joe ends up in bed wth Delia his ex-girlfriend from the days when he was still straight. If that is not awkward enough, things get really complicated when Delia then finally gets pregnant, news that she knows will not go down too well with infertile Rodrigo.

With Joe finally discovering the truth about Tom, Delia having to choose between husband or baby, and Herbert getting a big promotion at work which means re-locating just after he has met and fallen for outdoorsy sporty Nicholas (Curt Hansen), decisions have to be made.

This is essentially a refreshing and easy-going feel-good boy-lit dramedy. With its predictable plot that holds no surprises at all, and which follows through with its very obvious intention in ensuring that there is a ‘happy ever after’ ending for all the characters involved. With an entertaining script (that could have been tightened in the second half) and it’s very likable and talented cast, this crowd-pleaser movie will appeal to most hopeless romantics.  And especially anyone who has ever been catfished.

P.S. The tiny cameo role of Rodrigo’s mother is played by one of Almodovar ‘s favorite actresses Carmen Maura 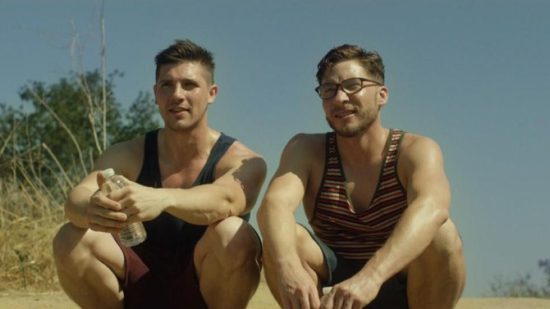