Any documentary that makes a contribution to the continuing transgender dialogue is important, but when it is as poignant and compelling as ‘Real Boy’,  then it can play a significant role in nurturing more understanding and acceptance both within the community and society at large.

Queer filmmaker Shaleece Haas subject is a disarmingly charming young teenage musician Bennett Wallace who she starts following when he takes his very first steps of beginning to take testosterone .  Haas keeps with Ben up to the part where he has ‘top surgery’ and even beyond when he is adjusting to the fact that he is finally achieving his dream.We see through early home movies that as Rachel, she is ecstatically happy on the 5th birthday when she gets the gift she has always wanted : a suit jacket.  There are other clues too that clearly show that Ben’s desire to re-align his body to his real gender were present right through his childhood.

His divorced mother admits that she suspected something was ‘not right’ when Rachel was just 3 years old, but now she is struggling to understand and support Ben’s insistence on transitioning.  So much so, that Ben will have to find the money himself to pay for his expensive surgery, but that is certainly not going to be an obstacle that will stop him moving forward as he gets jobs to raise the fees himself.

One of the greatest supports for transgender kids like Ben is the number of them that have their own YouTube channels which they use to video diary their own experiences, and which helps them overcome their biggest fear that they are both abnormal and alone.  Through the internet Ben meets Dylan who is about at the same stage of his own transitioning  and they become fast friends very quickly. It is apparent that having someone like this to confide in and share with, is probably much more beneficial than what most professional counseling could proffer.

Ben also befriended a professional musician Joe Stevens who was his transgender hero and who he met at a Sober Convention as both of them had been struggling with their addictions. Although Joe invites Ben to stay for a month in his house so that they can make music together, it is seeing Ben interact with Joe’s totally accepting parents that has an even bigger impact on him. In fact with Dylan’s mother helping both her own son and Ben deal with the surgery, it seems that Ben’s own mother is the only one out of step in this scenario.

However when both boys go to Florida, Ben’s mother flies down too and it’s here when she reconciles with her son, that her transformation into fully accepting him as Ben, starts to finally kick in.

It must be said that it Ben’s completely refreshing and utter honesty that really steals the film, and our hearts too.  As he describes his ‘journey’ he admits that even taking such a major step as top surgery doesn’t heal all the hurt that he has felt in trying to adjust both his body, his mind and his psyche into where they should be. Even when the path is relatively smooth …..well at least compared to the alarming number of transgender youth who end up taking their own lives …we learn from Ben that is a lot more complex then any of us cisgender folk could ever begin to imagine.

Ben’s is a warm, wonderful uplifting story and so full of hope and is about transitioning in a way that anyone could relate too, and therefore it so deserves to find an audience beyond the select crowds of the Film Festival circuit. 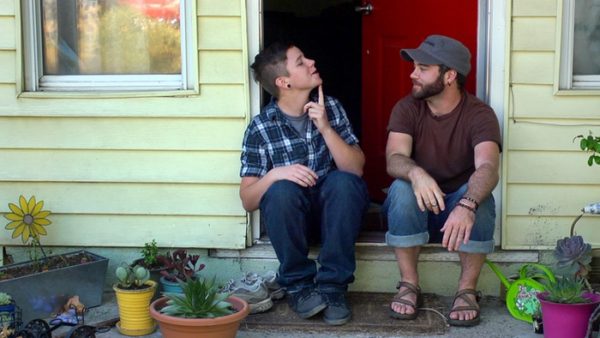