Literally just a stone’s throw from the corridors of power in our nation’s capital, lies a whole area of Washington that is completely alien territory to most Americans. Seeing it portrayed in this startling powerful new documentary, you find that you have to pinch yourself to remember what is being played out here is not some fictional dramatized TV program, but very real life. This area is home to hundreds of African/American and Latino gay and transgender youth who have to survive in a culture which has one of the highest rates of anti-gay violence in the whole country, but who have now collectively decided that enough is enough, and it is time to fight back.

Ten years ago, a group of middle-schoolers started ‘Check It’ to provide its members safety in numbers and let people know that if you jumped a gay kid in DC now, you’d likely get jumped back in retaliation.  The original 10 members have grown to over 200 tough, rough kids who put up this angry aggressive front with everyone outside of the tight clique that they encounter.  They are mouthy and sassy and although most of them are extremely effeminate and outrageously flamboyant, they are far from being sissies for as well as their wickedly sharp tempers, they are also packing knives and brass knuckles. They walk around wearing lipstick and dresses daring anyone to say something to them which is pretty brave …… and very crazy too. 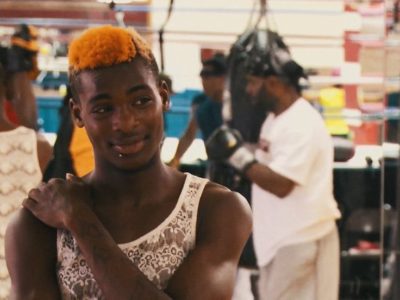 They fund their activities with petty crimes and car jacking, but a great many of them end up hustling as rent boys (and girls) for cash on a notorious stretch on K Street, which means they have to grow up faster than most to become street-wise to survive. One of the more scarier facts that the documentary reveals is in a scene when they all rather matter-of-fact recount the number of times they have been attacked, beaten up and even shot-at. There is one sobering incident when one of them phones a rape-help support line, but gets refused help when she reveals the attacker was a prostitution client.

The movie avoids having any real narrative for the first part of the film as it starts to explore the lives of Trey, Day Day, Alton, Star, Skittles and a handful of others. However the second half focuses more on how a couple of extraordinary adults are committed to trying to make a difference to these kids lives that the authorities have, for the most part, given up on.   The main one is Jarmal Harris, who also grew up in the Projects, and now runs a summer fashion camp to offer some of the kids an opportunity to prepare for actually getting a job in a field that they love. Even he has trouble making them lose their loud angry attitudes and to stop fighting him every inch of the way, as he is one of the very few chances that they may have of real hope and even happiness.

At this juncture in the movie although the filmmakers and kids have left you reeling in both shock and despair, you end up desperately hoping that this lifeline will be enough to really make a difference.  The police call ‘Check It’ a gang, but you cannot help siding with its members who think of it as their family, particular by the very many whose parents had both addictions and issues so that they literally grew up on their own.

Dana Flor and Toby Oppenheimer the filmmakers filmed this over three years, and went back a year later for an epilogue for these kids story.  So far thanks to Ron “Mo” Moten the founder of Peaceoholics Inc,  it is a good one that is making a difference for a few , which is a start, but they still have a long way to go to give these LGBT kids hope for a better future.

This excellent thought-provoking movie paints a picture of such stark reality that is tough for most of us to even comprehend.  More importantly it is yet another wake-up call that it is far to early for anyone to get complacent about LGBT rights simply because we had major victories like SCOTUS making same-sex marriage legal.  The kids in ‘Check It’ need so much more than that just to simply survive.

“Check It” will be shown at Outwatch – Wine Country’s LGBTQI Film Festival at 3:15 p.m. Sunday, November 6 at Third Street Cinema in Santa Rosa.  For tickets go to www.outwatchfilmfest.com.