Don’t be fooled by the deceptive title of this movie which implies it is just another teenage romp, as Craig Boreham’s feature film debut, is one of the most powerful edgy LGBT dramas  to come out of Australia for some years. It’s hard not to compare it with Ana Kokkinos’s 1998 award-winning break-out hit ‘Head On‘, not just because of its gritty storyline but the fact that it also centered in a immigrant Greek/Australian family.

His parents blame Miklós for the death of their favorite son, and Tomi’s heavily pregnant girlfriend Annuska (Shari Sebbens) seeing Miklós floundering, wants him to replace Tomi in her life.  Then to make matters even more complicated and depressing for him, Dan starts dating a new girlfriend. Miklós bitterly resents the fact that she has usurped him in Dan’s affections, and may now in fact put the boys long-held plan to leave town in a long trip together in jeopardy.

After a particularly bad fight with his parents Miklós is picked up by a couple of bad eggs who lure him back to their apartment for some drugs and internet sex.  He stops just in time, but ends up back at the apartment again on another occasion when matters get worse at home. This time he participates.

When Miklós finally comes to terms with his sexuality and gets angry enough to confront Dan about his feelings, it results in a brutal scene which like a lot of the story has an inevitability about it, but is nethertheless still quite shocking to witness.

This portrayal of a frightened teenager feeling responsible for his sibling’s death and for his parents own unhappiness and scared out of his wits of losing his one close friend makes for a compelling powerful drama.  His struggle with his identity is very real indeed, and faced with what he conceived as potential obstacles, it is often a fine line whether he will overcome them and survive or not.

Santos gives a pitch-perfect performance with an impassioned intensity as the anguished Miklós that helps set this movie apart from most in this genre.  Even with the predictability of most of the story line, he still added a freshness and a constant element of surprise in his portrayal that showed a remarkable maturity in one so young.

Writer/director Boreham cut his teeth on a whole string of very well received LGBT short films which  obviously proved good groundwork as it resulted in this exceptional emotionally-charged feature which is sure to be a big hit for audiences everywhere. 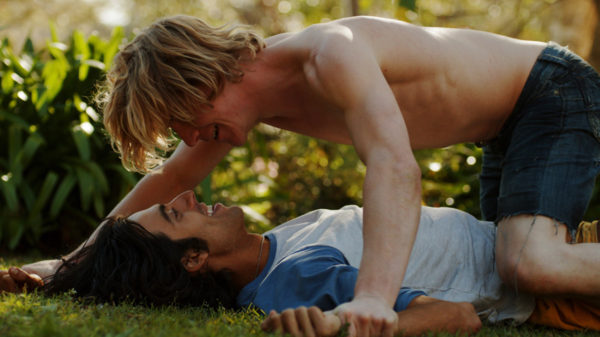 ‹ They Go Low, We Give $$: Ten Great LGBTQ Charities To Support In Desperate Times › Asia Kate Dillon Makes History as One of the First Non-binary Gender Identifying Actors to be Cast on Mainstream TV