Jehri Jones is a most remarkably resilient women.  The outwardly cheery disposition of this 74 year-old-transgender Mississippi native is because she is quick to dismiss the struggle of her journey to establish and accept her own identity which didn’t start until she was in her 40’s, and was not completed until she could finally afford the gender alignment surgery when she was in her 60’s.  She was estranged from her four sons when their very religious mother banned Jehri from their lives the moment she started her transitioning.

Now that her ex-spouse has died, Jehri has persuaded two of the adult sons to move in to her double-wide trailer home, and they are all making a concerted effort to re-establish their relationships. Her rather dour sons clearly lack Jehri’s joie de vivre, but when 37 year old Brad finally comes out as gay, he starts to sheds the anger and resentment of Jehri having the confidence and resolve that he lacks.  Trevor his sibling leads a very restricted home-bound life as he suffered some sort of brain damage at birth, but he is at least better off than his fraternal twin Trent who is schizophrenic and lives in an institution.

Jehri’s fourth son Wade has two teenage children who usually hang out with Jehri after school whilst he is still at work.  He professes his reluctance to share with them the fact that their Grandmother was once their Grandfather, but when he does eventually broach the subject, his kids accept the news with alacrity and are not fazed at all.

As part of her ongoing battle to get people in this poor and very conservative Bible Belt Country to accept her for who she is, Jehri insists on attending services in her strict Baptist church.  When she does face rejection like at the funeral service of her late sister, Jehri shows the vulnerable side that she normally works so hard at suppressing.

This charismatic woman loves to dress with flair in a youthful style that shows off her slender figure which both belies her age and makes her stand out in the crowd.  What is also very noticeable is that the family, who never seem to have a dull moment, may have limited financial means but they keep their trailer home and their yard immaculately and with a real sense of pride.

What strikes you most however in this compelling new documentary from Moby Longinotto,  is the way that this very disjointed group strive to be as open and as honest as their abilities will allow in order for them to become a real family at last. They soon got over using different pronouns when they talked about their father, and it seems likely that they will somehow manage the rest of the changes together soon.

Jehri’s view on life is so uplifting and completely positive that it is a sheer joy, and something of a refreshing change, to watch her story being told so effectively and with the real compassion that it so deserves. 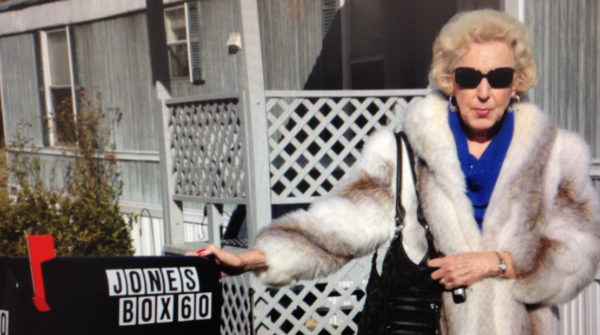