Film Review: “Center of My World” 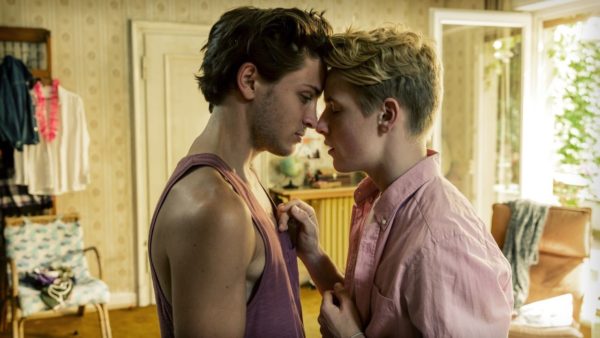 When German high-schooler Phil (Louis Hoffman) returns from summer camp he is greeted so enthusiastically by his mother Glass (Sabine Timoteo) and his best friend Kat (Svenja Jung) as if he’d been away for much longer than just three weeks.  We soon discover however that both these women tend to act melodramatically over almost every little thing.  It is only his twin sister Dianne (Ada Philine Stappenbeck) who all but ignores him as she has obviously fallen out with their hippy mother over some issue and is now behaving in a surly secretive manner.

The family live in a rambling old fairy-tale house, called Visible for some unexplained reason, in a small provincial country town.  Glass, quite the free spirit, has always refused to disclose the identity of the twins father which is a major source of irritation to Phil and seems to add to his feelings of insecurity. Glass seems to work through a whole series of lovers with an insatiable appetite. and the moment any of them try to get close to her, she immediately discards them.

The story however is not about her relationships but that of young Phil who is immediately awestruck when a handsome newcomer joins his class in school. Besides just watching Nicholas (Jannik Schümann) sprint around the track every day, Phil makes no effort to actually talk to him as he assumes that Nicholas is such a hottie and is out of his league.  It turns out that not only is he very obtainable, but he actually makes the first move and hits on Phil in a very steamy scene in the school showers.

From then on a besotted Phil is totally hooked and persuades two middle-aged lesbian friends of his mother to loan him the use of their summer house for his ‘trysts’ with Nicholas.  Phil even overcomes the potentially tricky situation of introducing his best friend to his new boyfriend and is surprised to discover that they not only do they all get along, but from that moment the three of them are inseparable.

It is obvious that the deeply sensitive Phil, throwing himself so energetically into his first real love that offers him a life outside of his roller-coaster relationship with his mother and the fading one with his sister, may have to deal with the  possibility that what he has with Nicholas will not last for ever.   He is however blinded by his infatuation that it never occurs to him that Nicholas is anything less than perfect.

Austrian filmmaker Jakob M. Erwa adapted Andreas Steinhöfel prize winning novel, and the fact he may have been sticking somewhat closely to that maybe the reason that the subplots of the twin sister, and to an extent the mother, were distractions from what is otherwise a rather charming coming-of-age tale.  There is nothing extraordinary in the main thrust of the story, but the movie is filmed rather beautifully with the young good-looking cast members very convincing in their roles, in and out of their clothes.

Expect to see this at US Film Festivals in the coming year before it is released on DVD/VOD.

‹ Source: CDC Canceled LGBTQ Youth Summit Because Trump Won the Election › When It Comes to Being Out at Work, Some Things Haven’t Budged In 30 Years