Its been some 17 years since Del Shores’s movie Sordid Lives played for a record-breaking  95 weeks at the Palm Springs Movie Theater. Mainstream audiences elsewhere may have dismissed the movie all too quickly, but it wasn’t long before it became a beloved gay cult classic that even spurned a prequel TV series.

Now we are back again amongst the dysfunctional folks of the small suburban town of Winters in Texas where it always looks like time stands still.  Shores has assembled all the old wonderful cast that still feel like family to us fans : there is the bible-reading chain smoking Sissy (Dale Dickey). her good-natured blousy sister LaVonda (Ann Walker) still searching for true love; and their stuck up sister Latrelle (Bonnie Bedalia) who is less impossible to be with now that she lost her big pretentious home in her divorce, and of course there is the ‘man’ of the family Bobby Boy (Leslie Jordan). He is no longer locked away in the Mental Institution, and is just about hanging on to his drag act in a small seedy gay bar, but is threatened with being fired by the new manager (Alec Mapa) who claims that no wants to see his Tammy Wynette impersonations anymore.

The plot is of course preposterous, but anyway its quite inconsequential and just a set-up for these larger-than-life characters to be outrageously rude to each other in the most hilarious fashion. This time around Shores has introduced a contemporary issue in the story to get all the Town’s homophobes worked up about when the handsome but bigoted new Church pastor  (Levis Kreis)  wants to have an Anti-Equality Rally to ensure that there are no same-sex marriages in their town.

Surprising enough it is Latrelle who turns out to be the heroine of the day, as having a gay son has finally mellowed her out. There are some great guest stars popping up throughout the whole piece  …. look out for the wonderful veteran actor Carole Cooke in a cameo  role as Hortense , and then there is the other vicar who pops up to conduct the wedding.  We cannot tell you who gets married, but we can share that the priest is none other than Whoopi Goldberg.

It is not essential that you have seen Sordid Lives to enjoy A Very Sordid Wedding, but it does help. It’s just so good seeing a bunch of wonderfully talented comic actors having such a blast, and sharing it with us like this.  It’s almost like we are guests at the wedding ourselves. 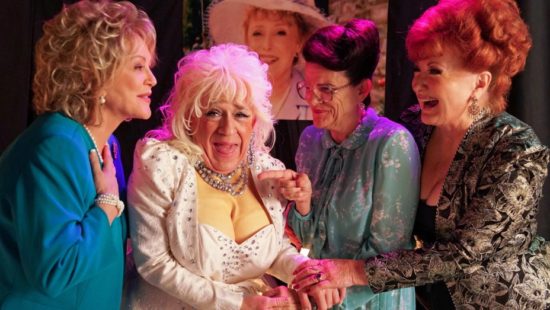 “The Perfume Thief:” A Story of Queer Bravery in Occupied Paris