Film Review: “As Good As You”

Grief can affect us in many different ways, but it’s often the reason that we may behave in a manner that is very difficult for others to comprehend or accept.  When Jo’s (Laura Heisler) wife dies after she has nursed her for 18 months, her life as she knows it falls apart.  She is a published author who is now dealing with writer’s block and has becoming somewhat obsessed with having the baby that she and her late wife never got around too.  At 41 years old her biological clock is ticking away, and so she is plying on the pressure on Jamie (Bryan Dechart) her much younger brother-in-law to keep to the promise she exhorted out of him when he was drunk at her wife’s memorial, of being the sperm donor.

Otherwise Jo’s life seems to center around just two close friends. Lisa (Anna Fitzwater) a punk aspiring photographer who owns a seedy bar that never seems to have any other patrons besides Nate (Raoul Bhaneja) who drinks all his days away there.  Both of them are in love with Jo and are competing for her affection,  but she very carefully avoids their overtures until one day Lisa turns up at her house with a bottle of bourbon and she finally lets her guard down.

Timing however is everything, and just after they have finished their ‘romp’,  Jamie turns up unexpectedly and is horrified to find that his late sister’s wife has seemingly already moved on. He was there to tell Jo that after the brutal psychological interview they had to undertake with Dr Berg a psychiatrist (a scene stealing turn by Annie Potts), he had changed his mind about being a donor.  She reacts by rejecting Lisa who storms off in an angry fit.

Fast forward and a dejected Jo is getting drunk again, but this time in another bar, where Nate happens to be, and now it’s his turn to fulfill his dream of sleeping with Jo, only  to be brushed off immediately after their encounter is over.

The fact that she has now alienated the three main players in her life is a wake-up call that Jo really needed, and with a slight push from Dr Berg, she has to accept that it’s time to finally accept that she needs to move on with her life in a positive manner if she is to survive.

This very earnest debut feature film written by Gretchen M. Michelfeld and directed by Heather de Michele is billed as a serious comedy about grief, but in reality there is very little to laugh about. It actually teeters too much on melodrama at times,  and although Hesler puts in a spirited performance as the over-wrought Jo it tests the patience of all those around her, and also us at times too. The tough part to swallow in reality is the premise that our sympathy for the grieving widow should be so compelling that it will make us tolerate her irrational behavior. That somehow just doesn’t sit right, and we end up instead being a tad annoyed. 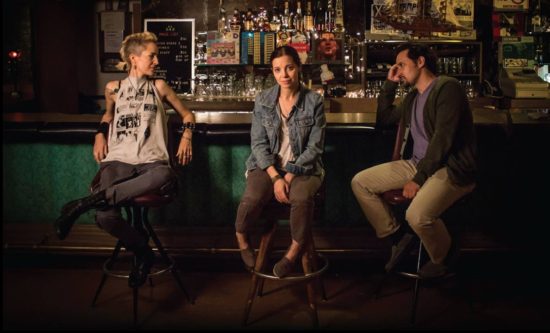