Via press release from the Family Research Council:

The bandwagon to protect religious liberty just got 18 more riders! Senate Republicans are joining a growing movement of conservatives who think it’s time the White House waded into the debate and issued an executive order protecting our First Freedom.

In a letter to President Trump, the group writes, “We were encouraged to learn of your consideration of an executive order that would require the agencies of the federal government to respect religious freedom throughout their activities and respectfully request that you issue such an order without delay.”

Citing the government’s crackdown on everyone from Little Sisters of the Poor to faith-based college clubs, they explain that it’s time for the administration to warn government agencies that may be tempted to punish people for their beliefs on issues like marriage.

“An executive order requiring federal government agencies to protect the right to religious freedom is necessary,” the senators argue, “and directing agencies to adhere to existing federal laws protecting religious freedom is sound policy. We agree with and commend your strong statements in support of religious freedom, most recently at the National Prayer Breakfast on February 2 where you stated, ‘…my administration will do everything in its power to defend and protect religious liberty in our land.’” The threat of colleges losing their accreditation or faith-based groups being stripped of their charitable status is real, they explain.

The “free exercise of religion rings hollow if individuals do not have the ability to live out their faith without fear of repercussion from the government… We cannot be a country that financially punishes individuals for practicing their sincerely held religious beliefs or decides which practices are a valid part of a particular religious tradition and worthy of protection.”

We’ve heard from our friends in the House that conservative members have their own letter in process. Let’s hope the president heeds their advice and gives Americans the protection they desperately need! Join these senators in urging President Trump to sign a religious liberty executive order by adding your name to this petition. 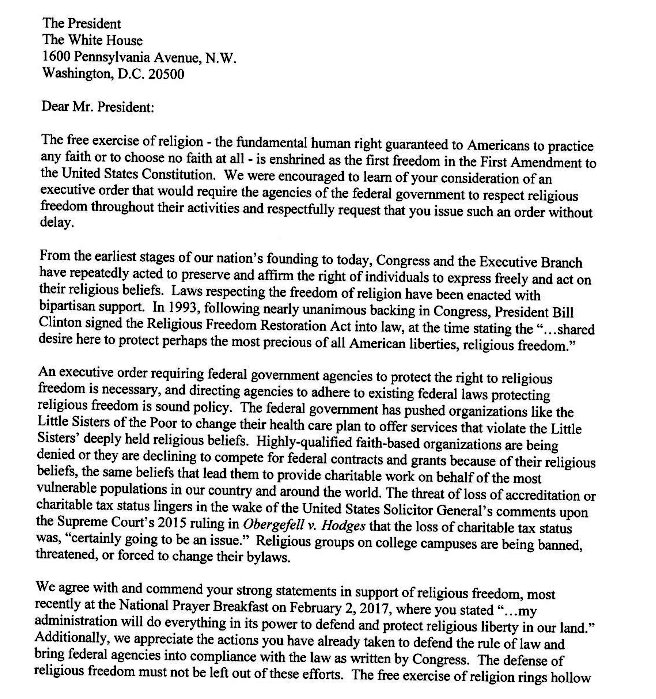 Fentanyl deaths on the rise in Marin and Sonoma counties