Organizers of a planned LGBT march on Washington scheduled for June 11, which has been named The Equality March for Unity and Pride, released on Wednesday the names of 12 of 13 co-chairs of the event but provided few additional details such as how it will be financed or the route of the march.

“The Equality March for Unity and Pride is less than two months away and we are thrilled to host this historic march in our nation’s capital,” a statement released by organizers says.

“Permits are being worked on, sponsors are being engaged, the website is forthcoming, and just this week we selected 12 of 13 National Co-Chairs!” the statement says. “This national group of diverse leaders in the LGBTQIA+ liberation movements will help shape the mission and vision of the march by elevating voices of those most underserved,” it says.

The statement adds that the diversity represented by the co-chairs would ensure “that in these trying times our communities can come together, march in solidarity, and demand equity, representation, protection of our most vulnerable, and safeguarding the many triumphs our communities have gained in the previous years while working towards championing many more.”

Among those named as co-chairs are Anika Simpson, Ph.D, founding coordinator of the Women’s and Gender Studies Program at Morgan State University, one of the nation’s historic black colleges; Ashley Smith, an official with the Capital Pride Alliance and a Human Rights Campaign Foundation board member; Catalina Velasquez, a widely recognized LGBT immigrant rights advocate and Senior Director of Strategic Partnerships and Communications for D.C.’s Casa Ruby community services center; and Jose L. Plaza, president of the D.C.-based Latino GLBT History Project.

Also named as one of the co-chairs is David Bruinooge, the New York City LGBT rights advocate who initiated the June 11 march through a Facebook posting in January that quickly drew thousands of messages of support for the idea of an LGBT march on the nation’s capital similar to the women’s march held the day following President Trump’s Inauguration.

The announcement on Wednesday of the names of the co-chairs and assurances that more details of the march would be disclosed soon came at a time when messages have surfaced on social media expressing concern that so few details of the event had been disclosed less than two months before the march was to take place.

Some Facebook postings have asked whether the march would actually happen and whether people who have made airline reservations to come to Washington should cancel them. Others expressed concern that as of this week no money had been raised to help pay for an event of this scale.

“There’s still plenty of time,” said D.C. gay activist Peter Rosenstein, who has been serving as a volunteer on a march planning committee prior to the selection of the co-chairs. “It’s all being worked out. The permits are in the works and the route will be decided on in a few weeks,” he said.

Bruinooge told the Blade the march route is still under discussion among organizers and that he would be consulting with National Park Service officials and D.C. police to determine which areas of the National Mall and other locations will be available and best suited for the planned march. 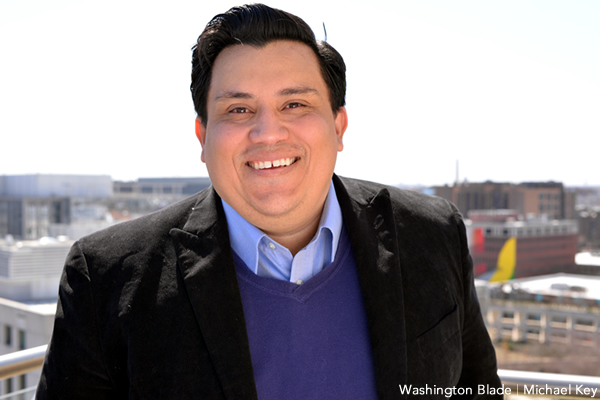 José Plaza of the Latino GLBT History Project is among the list of co-chairs for the Equality March. (Washington Blade photo by Michael Key)

The march is set to take place on the same day as D.C.’s annual Capital Pride Festival, which takes place on Pennsylvania Avenue, N.W. between 3rd Street, near the U.S. Capitol, and 7th St. The June 11 march would also take place one day after D.C.’s annual Capital Pride Parade, which usually travels from the Dupont Circle area past the 17th Street, N.W. commercial area to 14th and R St., N.W.

Ryan Bos, executive director of the Capital Pride Alliance, which organizes the Capital Pride events, said the group is cooperating with organizers of the Equality March for Unity and Pride but would not serve as the fiscal agent for the march.

“We have been discussing how to best represent and acknowledge these unique times and the desire for members of our community to voice their feelings,” Bos told the Blade in an email message. “We want to assist in getting individuals connected to organizations and activities that would allow them to take action,” he said. “In addition, we are discussing how best to represent this narrative on the Concert Stage as well.”

In recent years, Capital Pride has shunned political speeches at the annual festival and has used two separate stages largely for musical entertainment, including performances by nationally known singers.

In the statement released on Wednesday, march organizers point out that the Washington march will be accompanied by numerous “solidarity” marches and events throughout the country and internationally.

“Together we will continue to propel beyond a march but a movement for years to come, resisting and fighting for our communities’ rights, dignity and safety,” the statement says. “So please join us in D.C. or at solidarity events around the world. We welcome all!”

“And stay tuned for more information and details in the days/weeks ahead,” it continues. “We thank all of our supporters for their patience as we put this movement together and look forward to another historic event in Washington, D.C.”

The June 11 march would become the sixth national march on Washington for LGBT equality since the first national “gay” march was held in 1979. Subsequent LGBT marches on Washington took place in 1987, 1993, 2000, and 2009.

Following is the list of national march co-chairs as released in the April 19 statement:

2. Ashley Smith, The Capital Pride Alliance | Human Rights Campaign Foundation, Board Member | Pronouns: He, Him, His

4. David Bruinooge, Founder: The Equality March for Unity & Pride | Pronouns: He, Him, His

5. Elle Hearns, Executive Director of The Marsha P Johnson Institute | Pronouns: She, Her, Hers

7. Lydia X. Z. Brown, Chairperson of the Massachusetts Developmental Disabilities Council | At-large board member of the Autism Women’s Network | Pronouns: They, Them, Theirs