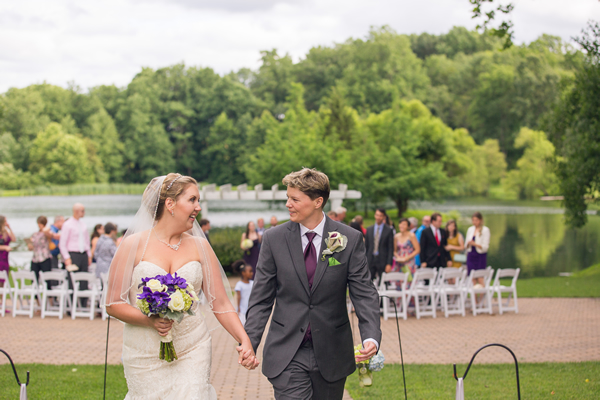 Spending on same-sex weddings has skyrocketed since it became legal in the United States with the Supreme Court ruling in June, 2015. It’s up 85 percent among LGBT men and 56 percent among LGBT women according to the Knot LGBT Weddings Study which surveyed 979 LGBT respondents in the U.S. who were married or engaged to be married.

The 2016 study, the latest for which figures are available, explored how couples are proposing, how much they’re spending, family acceptance and support, tradition and other statistics related to same-sex marriage. The Knot, a wedding industry brand, collaborated with Logo on the study.

The average cost of a wedding for male couples is $33,822, and $25,334 for female couples. In contrast, wedding spend increased by a mere 1 percent for men and 15 percent for women from 2014 to 2015, and the average cost of a wedding prior to legalization was $18,242 for male couples and $16,218 for females. Couples are now inviting more guests to their wedding, and participating in more wedding-related events than ever before, from engagement parties to showers and more. For the first time, LGBT elopements are down.

“It’s fascinating to see how wedding traditions, trends and spending continue to evolve. Our team at the Knot is dedicated to providing tools for every couple in America to use during their wedding planning process, from ‘I will’ all the way until ‘I do,’” said Kristen Maxwell Cooper, executive editor at the Knot. “The Knot is all about inspiring, planning and booking every wedding in America, and we mean every wedding.”

Among the findings are:

There is a 53 percent increase in LGBT couples gaining family acceptance, but more than half of couples still reported that family was not accepting of their marriage. Up from 28 percent for both men and women in 2015, family approval and willingness to help with their wedding increased to 43 percent for men and 44 percent for women in 2016.

The majority of couples reported reciting vows at their wedding ceremony (men, 97 percent; women, 98 percent) and having at least one partner walk down the aisle (men, 85 percent; women, 94 percent). As for the “first look,” more than half of all women reported not seeing each other until the wedding ceremony (51 percent). When it comes to the “first dance,” 74 percent of men and 85 percent of women and take part in this tradition.

About seven in 10 couples reported personalizing their reception by adding additional elements. The most popular personalization element for men is a wedding logo or monogram (28 percent), while women reported having a signature cocktail at the reception (27 percent) as their most popular element for personalization. Other personalized elements include having family members participate in the ceremony, honoring deceased relatives, playing or singing original music, using symbolic colors and incorporating religion and other traditions.

‹ “Rise Up” for Sonoma County Pride’s Solidarity Rally June 3 › Over the Top: Math Bass & the Imperial Court SF at the Oakland Museum