Transit Havana is an intriguing documentary from Dutch filmmaker Daniel Abma that is essentially a commentary on what it is like to be transgender in socialist Cuba especially now that is going through a state of flux since the Regime is lightening up after the US started making friendly overtures at last. Abma chooses to follow a trans man and two trans woman about their daily lives as they wait to see in the official Committee has chosen them to have gender realignment surgery. The good news for them is that the whole procedure is free, but the sad news is that only 5 such operations can be done every year when for one week only two Dutch surgeons volunteer their services.

Juani, is in his 60’s and he who refers to himself as Cuba’s first official transsexual, having started out on his journey in the 1970’s. He has already fully transitioned and has had reconstructive surgery, but is now hoping for an additional procedure to make his male anatomy function better during sexual encounters. 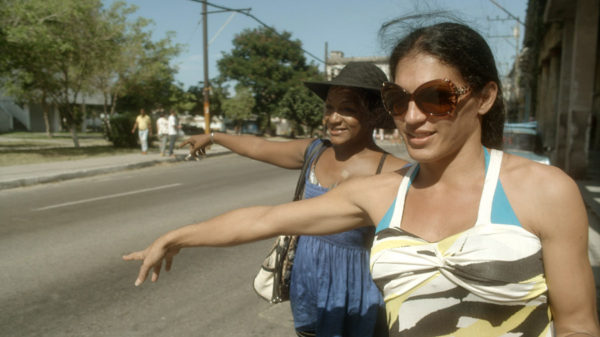 Malú is one tough cookie who has been living as a female since she was a teenager. She is fierce and funny and devotes a great deal of her time to being a transgender rights activist, and is in fact a natural-born leader for her community.  She unabashedly admits to have being a sex-worker, and there is a scene of her visiting her boyfriend of seven years who is now in jail for a reason that is never actually revealed.  Malú is convinced that the fact that she is so outspoken is the reason why she still has not been selected for the surgery that she so desperately wants.

The third one is Odette who is the only one of the group who is struggling with acceptance from her family.  She is a former Army tank specialist who now makes a very basic living out of doing menial jobs on a very small farm where her boss says that he only employed because he believed it was God’s will.  Odette’s own religious beliefs still make it difficult for her to come to terms with being trans,  and also accepting that her own Pastor is trying to convince her that surgery would be wrong in the eyes of God.

Getting equally as much time in the documentary is the charismatic daughter of the Cuban Leader Raúl Castro. Mariela is the head of Cuban National Center for Sex Education and the country’s most prominent LGBT activist amongst the political elite.  She has unquestionably been the major force behind all the progress made in improving the community’s rights, and  without her certain things like this gender-realignment surgery would never have happened. However she does never stop spouting the official Party line on how wonderful Socialism is, which is still tough for us to comprehend when everyone else in this documentary is literally struggling to survive and put enough food on their tables.

Abma’s subjects all made for such compelling viewing, so much so that it we share their pain when they discover that they have not been chosen for surgery again this year. In fact if there was one criticism of this otherwise quite perfect documentary it is that we never get even so much as a hint of how the Committee base their decisions on who gets selected and who gets rejected.

Sonoma County’s Got Talent! happens at Occidental Center for the Arts Sat. Nov. 5