God’s Own Country a breakout hit at both Sundance and Berlinale Festivals (where it was nominated for a Teddy for Best Queer Feature) is a remarkable debut from openly gay Brit writer/director Frances Lee, and unquestionably one of best queer love stories for a very long time.  Set in the wilds of Yorkshire (hence the title) with two young sheep farmers, the comparison with Brokeback Mountain is inevitable, but frankly Lee’s film offers entirely different perspectives on the unexpected relationship between these two rough country men, and most of all, it offers hope.

24 year old Johnny (Josh O’Connor) is a man of few words. Forced to take over the running of his family’s farm single-handedly since his rather gruff father (Ian Hart) became ill, and with his mother having walked out years ago, the only other person at home was his grandmother  (Gemma Jones) who acted as the housekeeper. The farm nestled in the bleak Yorkshire moors offering Johnny little respite from all the pressures of physically managing all the endless daily chores in the most inhospitable of weathers. Added to the fact that his father was constantly complaining anytime he deviated from doing things the way that he wanted them done and told that his ideas were ‘daft’.

Each night he escaped to Bradford the nearest town and just binge drank until he could hardly stand, and would end up throwing up when he barely made it home.  \Very occasionally like when he went to the Cattle Market, he would encounter a young lad who he would have a wordless sexual encounter in the back of his van, and then be totally horrified when the lad would try and kiss him afterwards. 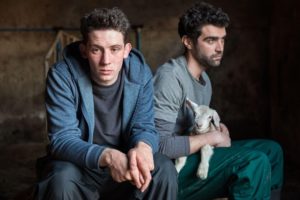 When lambing season came around and he needed some manual help to cope, his father hired a migrant Romanian worker for the week.  Johnny took an instant dislike to to the handsome swarthy Gheorghe (Alec Secareanu) who he derogatory called ‘Gypsy’ and the two men barely communicated with each other, until that is they were forced to camp out together for a new nights to be closer to the flock.  They were still acting rather sullenly towards each other, but somehow by the second night the two of them impulsively jumped on each other and started making.

Johnny who knew no better wanted his usual quick sexual release, but the older man took control and forced him into a making it all a much more emotional act of making love. The transformation the next day was remarkable because in that one brief encounter Gheorghe had shown him more affection than anyone else had done in his life time.

Developing any sort of relationship beyond this was pretty impossible with the need to keep it totally secret, but actually even when his grandmother came across a used condom in his bedroom and worked out what was going on, she kept her discovery to herself.  Then with the father suffering another stroke and being totally incapacitated, Johnny seized on the opportunity to ask Gheorghe to stay on longer to help out on the farm .  Even though the Romanian was more than happy to do so, it was inevitable that as Johnny had repressed his feelings for so long and had never ever been able to either verbalize or even accept them, then it wouldn’t be easy.  It was fairly obvious that inexperienced as he was he would that he would make some errors of judgement that would jeopardize their potential relationship.

Lee’s excellent script is based partly on his own experiences growing up in a very similar farm in that same neck of the woods, and although he claims that the work is not autobiographical, it does at least reference his own difficult in forming any sort of loving relationship in a rural area like this. A lot of the credit for the movie’s success is due to the casting decisions he made for O’Connor and Secareanu had this intense chemistry that made the whole piece sing.  The young British actor has been making a name for himself playing bit parts in big production movies (like Florence Foster Jenkins) but his understated performance as the awkward gangly Johnny proved he could play the lead too. He was a sheer joy to watch. The Romanian in his first English speaking playing the sultry and sensitive Geheorge became the man that most of us would happily fall in love with behind the sheep pen.

Kudos to for the actors who really had to get down and dirty with the animals themselves.  How Lee persuaded to get them to be up close and way too personal with them, is beyond us.  It certainly lent a real authenticity to the piece, but not one we would want to see too much off.

On a brighter note, there was a very casual naturalness to the nudity which was unusually explicit for a Brit movie, and the scenes of intimacy which developed from being rushed to being instinctive and tender and seemingly totally un-choreographed, making them so very sizzling hot.

Lee’s drama treads a refreshing path and with this enchanting romance shot in the stark beauty of the Yorkshire countryside, it’s a film that will resound so very well within the LGBT community that it is sure to become a new favorite cult gay classic.