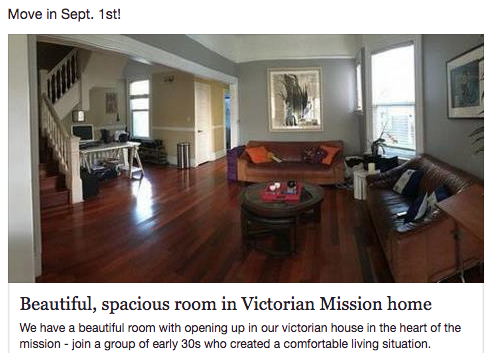 It’s no great surprise that cities and neighborhoods that boast significant LGBTQ populations tend to be the ones with the most gentrification. And while that’s great for local economies, it also means that many of the same queer folk who help make vibrant neighborhoods such attractive places to live are left priced out when rents inevitably tick ever more skyward.

Add to that the inherent historical challenges of finding queer-friendly housing, and securing a spot to rest your head can be an incredibly daunting task.

While panning for queer-friendly housing gold can still yield success on sites like Craigslist, more people are turning to a bevy Facebook groups across the nation to link up with potential like-minded roommates.

“Let’s keep our friends together in this beautiful city,” reads the tagline of Juanita’s List, a San Francisco group set up by local drag queen Juanita More.

With the average cost of a one-bedroom apartment clocking in at around $3500 a month in San Francisco, these groups are needed more than ever for the city to retain the identity that made it a mecca for queer people seeking community.

In New York, where the average rent for a one-bedroom will set you back around $3000, the Queer Housing New York City group has over 22,000 members.

Using one of these groups is easy — just request to join. Once you’ve been cleared by an admin (not as scary as it sounds), you’re free to post housing opportunities or respond to others’ posts to your heart’s content.