A rather compelling Tony Award Winner Lena Hall in her first starring role in a movie, makes this rather cute musical a much more entertaining experience than one may have otherwise expected from what is a somewhat very predictable drama.  Hall plays Becks an aspiring musician who packs up her life in New York to drive to L.A. to join the love of her life.  She makes better time on the journey than she expects, and arriving a day early surprises her girlfriend who is the midst of entertaining a naked girl in her room.

With her tail between her legs Becks angrily drives off to the middle of suburbia somewhere and back to her childhood home where her ultra-religious widowed mother (played by the wonderful Christine Lahti) still lives. After an obligatory few weeks of being a self-pitying couch potato, Becks is shamed into getting out in the world again by her mother. ‘The world’ in this instance being a rather dingy bar called Perfectos run by Dave (Dan Fogler) an old schoolhood chum of hers, and the only man she has ever balled. 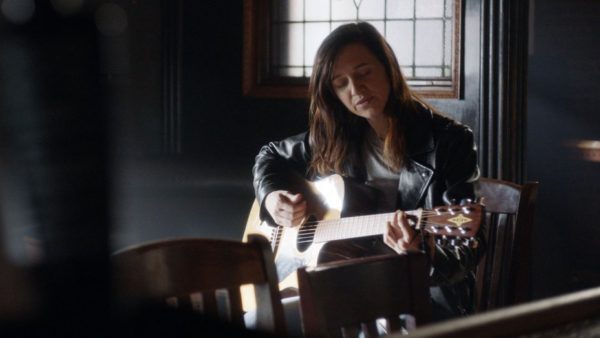 As Becks is broke Dave suggest that she brings her guitar and play for tips at the weekend when the number of his patrons sometimes goes into double figures. One of the people in the crowd is Elyse (Mena Suvari) who Becks bumps into a few days later when she is window shopping at Elyse’s Vintage Clothing Store.  She is married to another of Beck’s ex schoolmates, but not one she liked, and the couple live in a great big rather sterile mansion where Elyse is bored out of her mind.

The two women get closer when a very curious Elyse takes private guitar lessons, and it is clear to everyone where this will lead too.  And it does. It is inevitable in this small town where everyone knows everybody’s business that this clandestine affair cannot last. One of the funnier scenes in the movie is when Beck’s mother catches her daughter wearing a ‘strap on’ and penetrating a rather naive Elyse in broad daylight.

Evidently  the movie is very loosely inspired on incidents in the life of Alyssa Robbins, a singer-songwriter who with composer Steve Salett wrote most of the very fresh-sounding touching songs that Hall got to sing.

The movie is the feature directing debut of Elizabeth Rohrbaugh and Daniel Powell from a script that they co-wrote with Rebecca Drysdale and thanks to its cast, this entertaining wee drama, turned out far better than poor Becks love life itself.