16 year old Nathan (Bérenger Anceaux) is the new boy at school, and unbeknownst to him his arrival stirs up some very definite feelings in his classmate Louis (Jules Houplain).  When the two of them are at party at the weekend Louis makes his move and kisses Nathan in a deserted spot in the garden.  They are however not totally alone, and when an anonymous  photo suddenly surfaces online next day Nathan starts to feel the heat.  It is not clear which boy he is kissing, but that doesn’t stop all his homophobic classmates verbally teasing him, and eventually a few of the boys physically beat him up very badly. 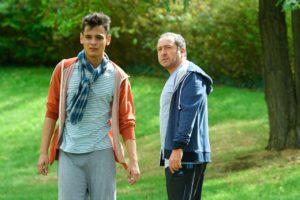 Nathan lives at home in this small suburban French town with his Police Captain father Stephane (Patrick Timsit) who is horrified when his son comes out to him, and the two who were previously very close, start to drift apart.  However when Nathan is attacked, Stephane comes to his senses and starts to support Nathan in his quest to pursue the object of his affection.

Meanwhile Louis who has been dating Laura (Lisa Kramarz) for a year now has very confused feelings about his sexuality, and is so ashamed of his feelings for Nathan that he joins in with the other boys when they violently pummel him. Louis’s own father  (Nicolas Carpentier ) is a strict disciplinarian and when eventually the news breaks that Louis is in fact the second boy in the infamous photo, all hell lets loose.

The situation is not helped by the school’s headmaster who insists on sitting on a high moral fence refuses to support Nathan for fear of a backlash from what he claims are the conservative parents.  It causes the closeted female maths teacher to out herself, and along with her straight ally friend, insist that he tackles the homophobic bullying before it gets anymore out of hand.

This rather charming French coming -of-age movie directed by Didier Bivel from a script  by  Jérôme Larcher  was originally made for TV,  but it so deserves the wider audience that it will get now with its digital release. With compelling performances form the two young leads, this is a very realistic and sympathetic take on a a very serious subject which is a real and dangerous problem for LGBT youth everywhere.  This one has a happy-ever-after ending, but far too  often stories like this  end in tragedy.