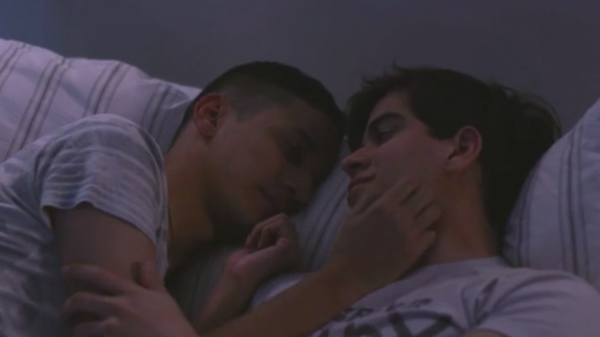 A very young set of Brazilian filmmakers have very loosely adapted Shakespeare’s classic love-story Romeo & Juliet and made it a contemporary queer romantic drama.  This web series was also set in the fictional Italian city of Verona, and is now where the Campelos and Monteiros families have vehemently hated each other for generations after a major falling out.

Openly gay Romulo (Arthur Chermont) falls for Ramon (João Mesquita) from the family he is supposed to hate,  who it turns out isn’t straight after all. Ramon shares his grandfather’s diary that he has just discovered which reveals the fact that original fight was over his gay lover and just a case of inherent homophobia which has been conveniently forgotten through the years.

In fact as the story unfolds it seems like one by one half of the characters let us know that they are gay too, although most of them have issues about it.

This DVD which contains the first six episodes of the series focuses on Romulo and Ramon getting to the point where they can acknowledge their feelings, and although they have to hide it from both families, they embark on a relationship together.

There is also an intriguing side plot as 24 year old Romulu has been diagnosed with the little known disease Precocious Parkinson which very few young people get.  Facts about how it is treated and its effects are carefully woven into the plot to help  overcome the prejudice and lack of understanding that most people have.

The series co-created and co-written by its two young stars and is directed by Jonathan Mendonça and was a major success in Brazil where it picked up several awards. It is a very cute and sentimentalized  love story played out by these very charming and extremely watchable young men, and has a cozy feel-good factor about it.

The first episode is stiff with some very wooden acting from the adults of the piece, but stick with it as it does get better. With its small budget and less-than-perfect production values, this is hardly like a big Shakespearean movie, but it is nevertheless an easy-on-the-eye series that will appeal to any queer hopeless romantic.