New Global Study: One in Four People Say Same-sex Couples Should be ‘Charged as Criminals’

More than one in four people (28.5%) believe that those in same-sex relationships should be ‘charged as criminals’, according to a new survey of over 100,000 people across 77 countries and territories around the world.

Unsurprisingly, the 2017 ILGA-RIWI Global Attitudes Survey showed that there were major differences in views towards sexual and gender minorities in different regions.

45% of respondents in the 15 African countries surveyed agreed that people who engage in same-sex relationships should be charged as criminals, by far the highest percentage around the world.

In the UK, one in six (17%) people said they believe that same-sex couples should be charged. 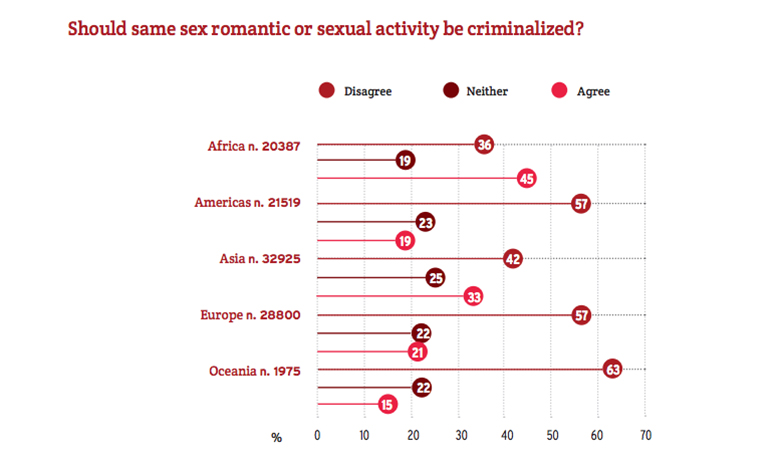 “It is worrying that these attitudes towards criminalisation hover around the 20% mark in many developed countries,” said Aengus Carroll, lead survey researcher and co-author of the report.

When asked if they personally know someone lesbian, gay or bisexual, 41% of respondents from around the world said they did, while 40% said they didn’t, and 19% said they weren’t sure.

The survey found that when respondents know someone belonging to a sexual or gender minority, their attitudes tend to be “markedly more expansive or inclusive” than when people don’t know someone.

While 55% agreed that equal rights and protections should be applied to LGB people, and 59% said the same for trans people, that figure rose to 73% among people who knew someone from either

Elsewhere in the survey, 48% of respondents around the world said they could respect their religion while being accepting of people in same-sex relationships, compared to 30% who felt the two were incompatible.