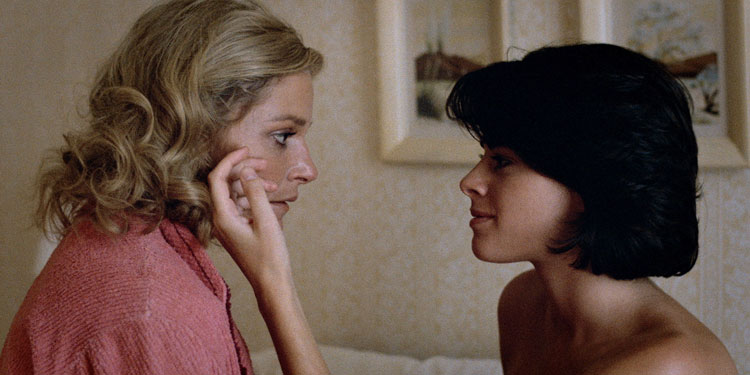 It shouldn’t be that way, but Desert Hearts retains a very special position as one of those incredibly rare movies by women, that doesn’t feel like it’s been co-opted either by the influence of men, or by a need to please the male viewer.

Based on Jane Rule’s 1964 debut novel, Desert Of The Heart, the film follows the uptight Professor Vivian Bell (Helen Shaver), who arrives in Nevada from New York in order to get a divorce. Her marriage has simply run its course and she has decided she needs a fresh start, but in order to get the divorce, she needs to establish residence in the desert state.

Life on a ranch in Nevada is very different to where Vivian came from, and it also brings her intro the sphere of the younger Cay (Patricia Charbonneau), who’s about as close to an out and proud lesbian as its possible to get in the 1960s American west. Cay begins to develop feelings for the New York academic, but for Vivian, admitting she feels something too will need her to open up far more than she is used to.

Desert Hearts is a beautiful love story that’s carefully told and which pulls the audience in as it slowly allows its uptight and cerebral central character to unfold against the background of gambling and ranches that are far different to her city life. Director Donna Deitch has said the genesis of the film was her desire to make a lesbian-themed movie that wasn’t framed by tragedy. She succeeded admirably, instead creating something that takes women, their feelings and their sexuality seriously. It does it in an emotionally grounded and affecting way, and you can certainly understand why it became an instant lesbian classic the moment it was released.

As noted above, it’s also still exceptionally rare, not just smashing the Bechdel Test, but completely reversing things to how they typically are in movies. For example, the male characters are largely adjuncts to help illuminate the women’s stories rather than the other way around. There are several nice, subtle moments where male characters come in and act in dominant, privileged, patriarchal ways (even if they’re not aware that’s what they’re doing), but the movie literally never shifts focus from the women, which allows them to retain the power.

This Criterion release presents a great new HD master of the film, alongside some very worthwhile special features. Desert Hearts super-fan Jane Lynch interviews director Donna Deitch in one of them, where they explore where the film came from and the impact it had. There are also featurettes with new interviews with the main actresses, as well as some of the crew. It’s worth watching all of these features, as each person has a slightly different perspective. If nothing else it gives some interesting insights into the intense and rather famous sex scene between Cay and Vivian, which is still a masterclass in how to shoot women making love in a way that’s erotic and sensual, but never feels like it’s been co-opted by the male gaze.