NFL Prospect: I Was Grilled About My Sexuality 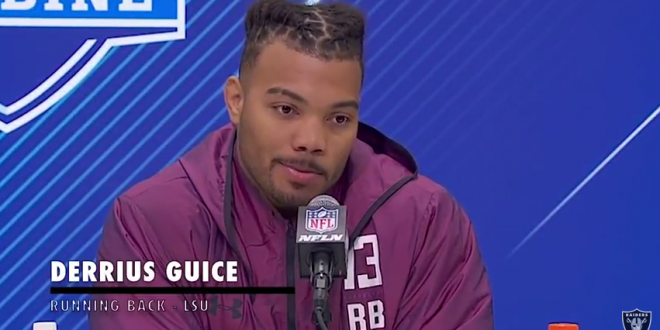 Former LSU running back Derrius Guice said in an interview Wednesday that one NFL team asked about his sexuality and another inquired if his mother was a prostitute at the NFL Scouting Combine that concluded earlier this week.

‘’It was pretty crazy,” Guice said in an interview on the SiriusXM NFL show Late Hits. “Some people are really trying to get in your head and test your reaction. I go in one room, and a team will ask me do I like men, just to see my reaction. I go in another room, they’ll try to bring up one of my family members or something and tell me, ‘Hey, I heard your mom sells herself. How do you feel about that?’”

NFL spokesperson Brian McCarthy said in an email to USA TODAY Sports Thursday that the league is “looking into the matter.” “A question such as that is completely inappropriate and wholly contrary to league workplace policies,” McCarthy said. “The NFL and its clubs are committed to providing equal employment opportunities to all employees in a manner that is consistent with our commitment to diversity and inclusion, state and federal laws and the CBA.

“The fact that Derrius Guice was asked by an NFL team — and a prospective employer — about his sexual orientation is absurd and inappropriate,” said HRC Director of Public Education and Research, Ashland Johnson. “With similar incidents already reported, it’s clear that the NFL did not do enough to prevent it from happening again. Guice’s experience illustrates the risks faced by millions of LGBTQ people today in employment, athletics, housing and other areas of their lives. It’s why we need swift action to condemn these kinds of practices and to fight for passage of the Equality Act to ensure comprehensive nondiscrimination protections for LGBTQ people. The NFL should take serious actions that address these unacceptable incidents and the perpetuation of an unwelcoming anti-LGBTQ environment, including publicly supporting the Equality Act.”